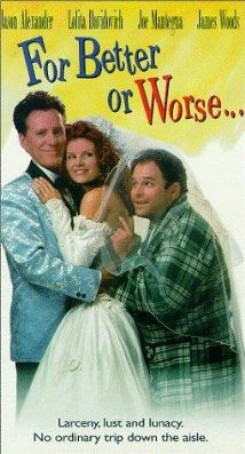 For Better Or Worse

Michael Makeshift is a man with a mission. Although not afflicted with these addictions, he attends Alcohol Anonymous, Overeaters Anonymous, Gamblers Anonymous and Kleptomaniacs Anonymous meetings in an effort to meet women. In one scene at a Kleptomaniacs meeting, he is in front of the room speaking and notices the microphone is missing -- he had stolen it at the previous week's meeting in an effort to be accepted by the rest of the members. Michael also attends psychotherapy sessions with Dr. Plotner. During one of their sessions, Dr. Plotner gives Michael a relaxation video tape in which there are two puppies getting into their beds and relaxing. Throughout the film, Michael's landlord badgers him for the rent money as he is three months behind. It seems that Michael's only real job experience is when he worked for his father who owned a hardware store. Since his father sold the business, and ran off, Michael has never been able to keep a job. He is, however, hopeful, and keeps promising the landlord that he will get caught up on his rent. Unfortunately, this never happens. Michael would rather die than admit that the love of his life, Valerie, has dumped him and moved to Denver to play in a rock and roll band. He holds onto her memory by constantly painting her portrait which he has all over his apartment. One evening, as Michael lay sleeping on his couch, his brother Reggie bangs on his door. Michael and Reggie are not what one would call "close." In fact, the only thing that they have in common is collecting shoe horns from all over the country. Michael has never forgiven Reggie for marrying his first love. Reggie, it seems, has been married three times. In fact, the reason for Reggie's visit is to tell Michael of his fourth marriage, which has just taken place in Las Vegas. Reggie's new wife, whose name is also Valerie, is passed out in the car downstairs. Reggie asks Michael to watch over her for a few days as he has business which must be attended to. It is now that the real insanity begins.

Animal action is mild. In addition to the scene on videotape with the puppies relaxing in their beds, there is a scene that has two pigeons sitting on a rooftop. American Humane was on the set when animal action was filmed.