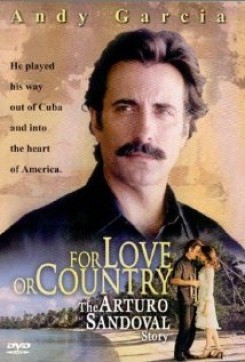 For Love or Country

Story of the world-renowned trumpet player.

There is a circus sequence near the beginning of the film. The circus was actually a set, and six trainers were present to monitor and direct the animals. The animals had all previously performed in circus acts and were accustomed to the environment. For the elephant action, one trainer stood in the middle of the ring of elephants and used verbal cues and hand signals to direct the animals while the other trainers stood nearby. As the elephants strut their stuff, a woman rides in the ring next to the elephants. The woman was an experienced trick rider who performed the same act for various circuses. Dogs enhance several scenes by running free in the background. One trainer would release the dog at point A and the other would call the dog to him at point B. Later, two dogs sniff the ground in a courtyard. For this, the trainer spread dog food on the ground to attract the curious canines. Also, the pigeons which appear in the movie were filmed in their natural habitat and were not hired by production for their services.