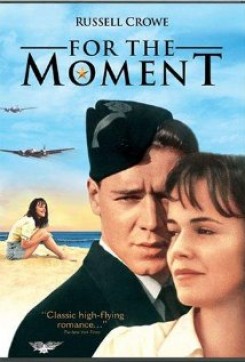 For The Moment is a drama set in Manitoba, Canada. The British Commonwealth Air Training Program is training young men to fly fighter planes against the Germans during World War II, Arthur is one of these men. One night he goes out with a fellow pilot and meets Lil. Arthur and Lil are attracted to each other but Lil is married to another soldier fighting in the war. Lil hasn't seen her husband for a long time and she is lonely. Lil and Arthur start spending more time together and eventually they fall in love. This story isn't just about Arthur and Lil, it also involves the struggle of a few men in the Air Training Program and how they deal with their everyday trials and tribulations while preparing for combat.

Animal action is mild and consists of animals mainly in the background. Lil lives on a farm and chickens are seen pecking the ground while cows are seen merely standing. In another scene, Arthur and Lil are driving through the countryside and birds are seen flying in the air. Betsy, the town's bootlegger and prostitute, owns a farm where chickens are seen merely roaming in the background. She has two children, a girl and a boy, and in one scene the boy is sitting on a horse while his sister pulls the reins to get the horse to drink water. Later, Betsy is talking with a gentleman and her children are seen in the background walking a horse, the girl leading the boy, who is riding. Also, in another scene, Lil is on her way to meet Arthur for a picnic and she is seen riding her horse in the meadow.