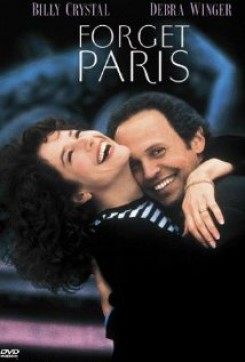 Forget Paris is a present day comedy about Mickey and Ellen Gordon, as narrated by their friends who are awaiting the Gordon's arrival in a restaurant. They are supposed to be there in the celebration of Mickey's best friend, Marv's, and his fiancee's upcoming wedding. Mickey Gordon is a professional basketball referee who travels the country refereeing games. Prior to his marriage to Ellen, Mickey dated professional cheerleaders from all over the country. Mickey had accepted his single life the way it was as he thought that he could never settle down because of his job. Mickey's father, who left him and his family when Mickey was only ten years old, suddenly dies. His last request was to be buried in Paris next to the men he served with in World War II. Since Mickey is the only one to even acknowledge his father's death, he takes responsibility for shipping his father to Paris. After arriving in Paris, he finds that the airlines has lost his father's casket. Enraged, he refuses to leave the airport without knowing the whereabouts of his father. After two days of being in the VIP waiting room at the airport, the airlines found his father's casket. Ellen Andrews, an American in charge of customer relations for the airlines, introduces herself with apologies for the inconvenience. She arranges to have the casket sent to the cemetery where he is to be buried the next day. Later that evening, as Mickey eats dinner alone, Ellen comes to his table to see how he is doing. He invites her to join him, but she already has a date. When she learns that no one will be at the funeral the next day except Mickey, Ellen shows up out of respect. They end up having dinner together that night, and since Mickey has never been in Paris before, he decides to stay for a while to see the sights. Ellen graciously offers to be his tour guide, and the romance begins. After arriving back home, Mickey can't get Ellen out of his mind. He keeps thinking "Forget Paris", but he can't forget Paris. Therefore, he can't concentrate on refereeing. One night he walks out of the game he is refereeing and onto a plane to Paris. He and Ellen start up right where they left off. When Mickey proposes marriage to Ellen, she refuses as she is still legally married to someone else. With a broken heart, Mickey once again leaves Paris without Ellen. He goes back to his job refereeing and one night in his hotel room, there is a knock at the door. It's Ellen who agrees to marry him, and their life together begins.

One evening, after they are married, Ellen is at home alone eating ice cream and watching television. A mouse crawls up on the couch and Ellen screams. She calls an exterminator, but insists that the mouse stay alive. The exterminator agrees, and puts flypaper on the floor that will keep him from going anywhere. In reality, you never see the mouse on the flypaper and in fact, the mouse was never on the flypaper. Ellen leaves for a little while. When she returns, she enters through the front door and hears loud squawking. When she walks in to investigate the noise, she discovers that she had left the patio sliding glass door open and a pigeon had flown in, landing on the flypaper. Ellen picks up the bird with the flypaper, places it in a box and quickly gets in her car and drives the pigeon to a veterinarian's office. On the way to the veterinarian's office, the car hits a pothole and bounces. The bird, still stuck to the paper, flies out of the box, lands on Ellen's head and becomes stuck in her hair. The bird begins furiously pecking at Ellen's head. Ellen is screaming as she tries to get the bird out of her hair and drive at the same time. When arriving at the vet's, Ellen gets out of the car, holding onto the bird in her hair and runs into the vet's office. For the scene with the mouse, the trainer stood behind the couch where he positioned the mouse, which had been trained by placing food in one area to go to that spot on the arm of the couch. When it came time to film the scene, the trainer simply put the mouse in position. The mouse went right to the spot where food had been previously. To accomplish the scenes with the pigeon stuck to the flypaper, the scenes were filmed in cuts, using a real pigeon and a mechanical one. Six pigeons were trained as babies to fly with paper on their feet. The trainers started with small pieces of paper and gradually enlarged it for the scene. To keep paper on the pigeon's feet, they attached a sheet of paper to a band on its foot. Karo Syrup was spread on the paper to make it look like glue. A real pigeon was placed in the box, and then replaced by a mechanical one. The mechanical pigeon was used when the bird flies out of the box. The real pigeon was used to establish the pigeon landing on the actress' hair. Food was placed in the actress's wig to attract the pigeon. For the scene in the car where the pigeon, now in Ellen's hair, pecks furiously at her face, the mechanical pigeon was used. As Ellen enters the vet's office, there are animals already there with their owners. They start barking and howling. Trainers were used as extras and cued their animals while other trainers, who were just off camera, also cued the animals with hand signals to bark and howl.