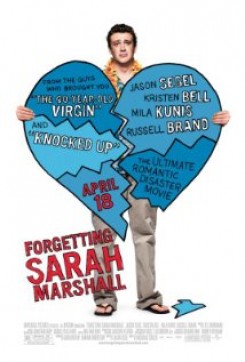 Peter (Jason Segel) takes a vacation to try to get over his recent breakup with his girlfriend Sarah (Kristen Bell). Unbeknownst to him, Sarah is staying at the same resort with her new boyfriend.

Peter and some other men chase a pig, catch it and stab it to prepare it for dinner. The trainer doubled as an actor in this scene. The pig was placed on its mark and released to run around freely. The actors were instructed to follow the pig around. The costumed trainer then held the pig around the neck while another actor pantomimed a stabbing motion with a rubber knife. A prop pig with fake blood replaced the real one for this part of the scene.

During the credits, a dog standing near Sarah stares at her. The dog's eyes begin to glow as it stares at Sarah. A trainer placed the dog on its mark, stood off-camera and used hand signals and verbal cues to get the dog to stay and look in various directions. The glowing eyes were a special effect added in later.