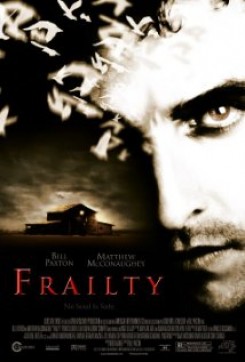 In this thriller, Matthew McConaughey plays Fenton Meeks, a man who informs the FBI that his brother Adam might be the serial killer they have been searching for. Through a series of flashbacks, the film shows Meeks childhood with a father, played by Bill Paxton, who believed he was on a mission from God to destroy demons that live inside human bodies. Fenton saw his dad as evil, while Adam saw himself as God's helper.

Although an AHA representative monitored the animal action in the film, AHA was not granted an opportunity by the production or Lion's Gate to screen the film in order to issue an end-credit disclaimer. Instead, the producers crafted their own disclaimer attesting to the treatment of the animals in the film. AHA acknowledges this disclaimer as unauthorized and has requested that it be removed from the film.

In one scene, documentary footage of an alligator is shown on television.