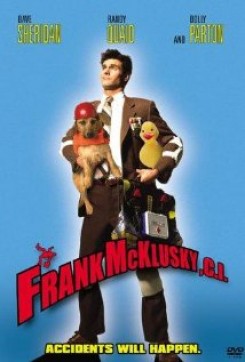 Not THAT Mr. Belvedere

Frank's dog Mr. Belvedere was played by a Dachshund/Terrier mix named Tyler. The helmet and safety vest the dog wears throughout the film were specially made for the dog and fitted for comfort. For his first scene, the trainer put the dog on its mark in bed and fastened the safety restraints. The actor removes the restraints from his own bed and then Mr. Belvedere's. The next scene is the two of them in the shower. Frank is scrubbing the top of his dog's helmet. The trainer doubled as the actor for this scene and the dog had rehearsed several times and was comfortable with the warm water dripping on him.

In several scenes, the trainer put Tyler on its mark and stood off camera using hand signals and verbal cues to get the dog to walk or look in a certain direction. When Mr. Belvedere rides in the car with Frank, the car is actually stationary. Filmed in front of a green screen, Tyler was placed on the front seat by the trainer and secured with the seat belt. The trainer then stood off camera and used a toy to get the dog to look in the direction he wanted.

Later, it looks as though Frank pulls Mr. Belvedere by his leash up to the doorstep. The leash is really attached to a piece of plastic made to blend in with the ground. The actor is really pulling the plastic piece. Special effects helped the dog's eyes to appear as though they were popping out.

A dead man hangs over the side of a large aquarium. The specially built aquarium had double panes of glass - one section had a bubble machine that gave the illusion of a real aquarium, while the other section of the tank contained real fish. When the actor climbed into the tank, he was actually only in the section with the bubble machine. After filming, the fish were returned to their owner.

The horse race sequence was filmed at the Santa Anita Race Track in Arcadia, California. All of the actors who rode in this sequence were required to take riding lessons. Actors only did minimal movements on horses while the more complicated maneuvers were done by experienced riders. In a memorable moment, it looks as though Frank's horse humps a horse statue. The real horse was positioned in front of a green screen and the statue was added in post production.

The animal props in the Chinese Restaurant and the stuffed horses were supplied by the prop department.