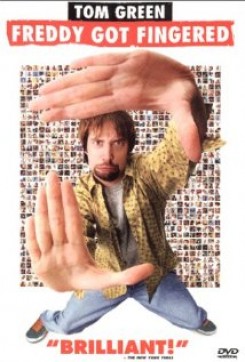 As producer, writer, director, and star, Tom Green parlays his unusual brand of gross-out humor to the big screen in Freddy Got Fingered, a two-hour romp through the twisted annals of Green's outrageous imagination. Green plays Gord Brody, an eccentric fellow with a penchant for infuriating his father (Rip Torn), with whom he is forced to move back home.

The Elephant Scene Nellie the elephant wore a loose-fitting saddle with a false penis--made of foam latex-- attached to it. An AHA representative, along with several trainers and a veterinarian, were present during filming to ensure that Nellie was comfortable at all times. The Horse Scene Gord's stud farm experience involves him manually extracting semen from a horse for breeding purposes. As a real-life stud farm inhabitant, the horse was accustomed to this routine procedure, and was calm with the supervised actor during rehearsal and filming. For Gord's next adventure at the farm, he sees two horses mating. For this scene, the production coordinated filming with the horses' natural breeding schedule. Several trainers and a veterinarian were present to ensure that all of the horses received excellent care. The Deer Scene Gord comes across a dead deer lying in the middle of the road. He slices the carcass open and pulls out its innards. Gord then wears the carcass, blood dripping all over him. The deer, the viscera, and the blood were all fake. The animals in the woods that watch Gord dance were not filmed for this production--the images are from stock footage. A Goat Crosses the Road During the desert sequence, a truck towing a house appears to narrowly miss hitting a sprinting goat. Although the truck looks like it was going at high speed, it was actually moving very slowly while the image was sped up with computers in post production. To get the goat to run past the "speeding" truck, trainers stood on either side of the vehicle with buckets of the goat's favorite food and called to the animal. The goat obliged and was rewarded with treats. An Udder Mess As the credits roll at the end of the film, an omitted scene shows Gord milking a cow by crouching beneath it and squirting milk all over his face. Under the supervision of trainers and a veterinarian, the actor gently milked the cow and did not harm the animal by placing his face beneath its udders. And Who Could Forget... It is hard to remember after all of this bizarre animal action that the family had two pet dogs. They are featured on leashes being walked by an actor in one early scene, and later running into the family house and eating a sausage suspended by strings in the living room. Trainers used a combination of visual and verbal signals to get the dogs to achieve their actions. A Note on Content American Humane Association endeavors to monitor animal action and provide a safe working environment for animal actors. Our primary purpose is to ensure that no animals are actually harmed and to uphold the Guidelines that support preventative planning and safety on set. Yet as creative artists weave their stories, they may not always depict animals in scenes to our liking. The First Amendment of the Constitution protects their right to do so just as it protects your right to criticize their work. AHA understands that in order to successfully provide animal actors with the protection they deserve, we must stay focused on our specific, vital goal. The worse the content, the more important it is that we be there. AHA in no way condones nor endorses the content of a film; we must remain focused on being effective in our daily efforts to promote ongoing protection for our vulnerable animal actors.