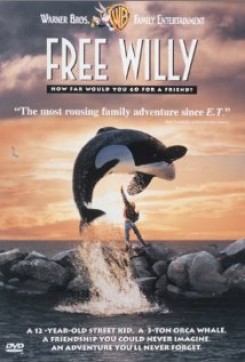 Free Willy is a wonderfully moving story about the relationship that develops between a rebellious captive whale and an emotionally troubled young boy. Jesse is an 11-year-old with a bleak past and not much of a future. His mother abandoned him and nobody has heard from her in six years. Since that time he's been passed from one foster home to another and has had numerous skirmishes with the law. In his latest skirmish, after a day of begging and petty thievery with his companions, Jesse is apprehended while vandalizing an aquarium. The authorities make a deal with Jesse to work at the aquarium repairing the damage and removing the graffiti, and they place him with new foster parents, Annie and Glen. The couple are warm and hospitable to Jesse, but he rejects any of their efforts of friendship. His attitude extends to all he meets at the aquarium, but he becomes immediately fascinated with the aquarium's latest acquisition, a killer whale named Willy. Willy, an adolescent Orca, was illegally captured by whalers as he was swimming in a pod with his family of whales in the ocean. Since losing his freedom and being brought to the aquarium, he has ignored all efforts to teach him to speak or any of the tricks that would entertain the public. Willy will only eat and swim about listlessly. Jesse, the loner, enjoys the solitude of playing his harmonica in an empty aquarium with only Willy for companionship, and the lonely giant seems to respond. Late one night, long after the aquarium has closed, Jesse slips, striking his head, and falls into the water. As he sinks unconscious to the bottom of the pool, Willy slides beneath him, lifting his body to the surface, where he guides the boy onto a poolside platform. From that moment on a special bond of friendship is formed between the two loners. Willy will do anything for Jesse and becomes quite a performer. The owner of the aquarium wants to cash in by presenting "The Willy Show". The show is a disaster when Willy is frightened by all the people and refuses to perform. When the greedy owner sees that Willy is not going to repay his investment, he devises another means to recoup his financial loss. He arranges to sabotage Willy's pool so the water will leak out and he can collect on the heavily insured whale. Jesse discovers the scheme and is determined to save and free Willy.

Whale action was accomplished with a real whale and animatronic or mechanical whales, both life-size and miniature. The producers of this film have a special interest in the plight of whales and took exceptional care to avoid endangering or stressing not only the whales, but all the animals in this film. All filming with the live whale was done at a seaquarium in Mexico City and our American Humane representative was present at all times. The whale portraying Willy is Keiko, a 13-year-old 7,000 pound Orcinus Orca, who resides at the seaquarium. Amid soaring background music, the film begins with some spectacular footage of a pod of whales cavorting freely in the ocean. Before long, whaling boats appear and men set nets as they pursue and encircle the whales. One whale is separated from the rest behind a net and calls to the others outside. This scene was accomplished by editing documentary wildlife footage with scenes staged with animatronic whales. Only animatronic whales were used for interplay between the whaling boats and the Orcas. On Jesse's first day at work at the aquarium, he observes two sea lions performing. They kiss, wave, stand on their front flippers, bow, and do a variety of other tricks. These were trained sea lions that were responding to trainers visual and verbal cues with fish as a reward. Willy circles and swims about the pool during this scene. The whale was responding to his trainers cues and was rewarded with fish. A life-size, 20 foot animatronic whale was used in the sequences with the whale and Jesse interacting in the tank and in all scenes with the whale out of the tank. For the scene where Jesse falls into the pool, unconscious, a photo-double was used for the actor. The scene was shot in cuts. As the photo-double went to the bottom of the pool, a trainer cued Willy to go to the photo-double. The whale swam to the bottom of the tank and placed his nose under the double and moved her to the surface, over to the pool's edge, and nudged her onto the platform. The actor then replaced the double. The trainer then cued the whale to come up and nudge Jesse by using his fist as a target on Jesse's side and instructed the whale to push. The whale received a food reward for each of his actions. When Willy is in a net in the pool being examined by the veterinarian, the animatronic whale was used. For the scene where Jesse feeds Willy by hand and pets Willy and Willy performs for Jesse, the scene was shot in many cuts. These were all trained behaviors by the real whale and trainers were placed strategically off camera so that they could cue the whale and give him his fish reward. The young actor also cued the whale at strategic times and personally fed the whale. For the scene where Jesse works with Willy and gets into the pool and rides him, a photo-double for the young actor was used. The whale was given sufficient time to become accustomed to both the photo-double, a female, and the young actor who played Jesse. The whale had learned all of his behaviors prior to filming and he performed them by responding to cues, by either the actor or trainer, with food as a reward. When Jesse and Willy bond with a tongue pat, a trainer stationed Willy by the tank edge. The actor knelt by Willy and personally cued him to open his mouth and rubbed his tongue and fed him. Jesse then patted Willy's face and gave him another food reward. When Jesse and Willy perform for the aquarium's owner, the scene was shot in cuts using both the young actor and his photo-double. Again, these were all trained behaviors which the whale performed in response to cues by either the actor, the double, or an off-camera trainer with food as a reward. For the scene where Jesse and Willy do their show for the public and Willy will not perform, the whale responded to his off-camera trainers cues rather than to any of the cues Jesse gave him. For the scene in which the children are banging at the windows of Willy's tank, a full-sized articulated or mechanical whale was used. For the scene where Jesse visits Willy at night just before Jesse decides to run away from home again, Willy made his movements in response to cues by his off camera trainer. The scene where Jesse gets Willy into a harness and sling and hoists him out of the water was accomplished with the real and mechanical whale and was shot in cuts. A fake harness with only two sides was used on the real whale. From this point on all of Willy's action in the film is accomplished with either a full-sized or miniature articulated whale and/or special effects which are extraordinarily realistic. The final effect is very moving emotionally. Audiences will cheer as Willy explodes out of the water. The dead fish present in many scenes and used as both seal and whale food, were all purchased dead fish. A representative of American Humane was present throughout filming with the live whale in Mexico City and also observed work with the animatronic whale. A representative of the Oregon Humane Society also observed some work with the mechanical whale filmed in the United States.