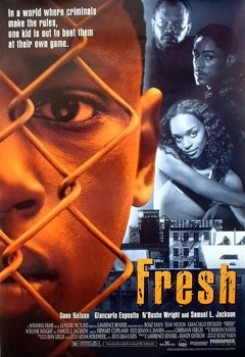 Michael, a young black boy, has been taken away from his family and is living in the home of his aunt and eleven other people. The one member of his family whom he loves dearly is his sister, who has left the house to live on her own. Michael is left to defend her reputation, as rumors persist on the kind of girl she is. Michael dreams of getting out of the projects and of having a million dollars someday. Michael is a very quiet but clever boy who seems to be studying life. The other person in his life besides his sister, whom he has a great affection for, is a young girl his own age. They meet and talk to each other on several occasions, at school, on the playground, etc. He also periodically meets with his father, whom he is not supposed to see. He appears to have little regard for his father however.

Michael becomes involved in narcotics. He is being treated poorly by the dealer whom he is selling for, who happens to be his sister's boyfriend. At a playground one day as he is watching several young men play basketball, he witnesses one of them pull a gun and shoot one of the other boys, killing him. At the same time his girlfriend gets shot in the crossfire. She dies with him holding her hand. Corky, the man who murdered the two young people, said he would kill anyone who ratted on him. Michael maneuvers his way into being involved in a big cocaine deal, only to get jumped by Corky and his gang who are his dealer's rivals. His best friend, Chucky, who is with him, is killed. As a result, his aunt tells him he must leave the house as his siblings are afraid for their lives as long as Michael is living there. Very cleverly he is able to convince Corky that some of his own men had hired him to do the drug deal. Corky becomes so infuriated that he kills two of the men that work for him. Then Michael goes to his sister's boyfriend, who has short changed him several times, and tells him that his sister is sleeping with Corky. The boyfriend proceeds to kill Corky and the rest of his gang. Michael then plants the cocaine and gun on his sister's boyfriend. He tells the police how Corky killed the rival gang members. The police offer him protection if he will testify in court. Michael's final victory is that he tells the police that he can never have protection as long as he lives in the projects and he needs to get he and his sister out of the area, which they promise to do.

In the last scene you see Michael and his father playing chess. Throughout the whole picture, Michael is very cool and calculated, observing life and people around him dying. Through the death of his best friend, the death of his girlfriend, and through all the other murders, he appears not to be shaken. However, now that the ordeal is over, he sits playing chess with his father with tears running down his cheeks.

There were three major animal scenes in the picture. One is of his dog playing with a stick making it appear as though it is being trained to fight. The next major animal scene was of a dogfight between two pit bulls. This scene was shot in cuts. The dogs, one being a male and one a female, were friends. When you see them wrestling, they have their mouths open and on each other, but they are playing. Sounds of dogs fighting were dubbed in later to make it appear like a vicious fight. Then, in the final scene of the fight, you see Michael's dog chewing on the throat of the other dog. The dog appearing to be killed was a dummy dog.

In another shocking, gruesome scene, Michael hangs his pit bull. This was also shot in cuts. You see him hold his dog up and tie the leash around a metal pole coming out of a building. Then you hear the dog struggling and breathing heavily and see his legs kicking. You see the face of a very distressed dog being hanged and then Michael takes out his gun and shoots the dog through the head. When you see the dog's legs kicking, it is his trainer holding him up with the camera just filming his legs. When you see the face and the full dog, it is a dummy dog hung on the pole. As in the other scene, the sounds of the struggle were added in post production.

American Humane was not on the set, but after discussing the scene with the trainer, who is an animal activist as well.