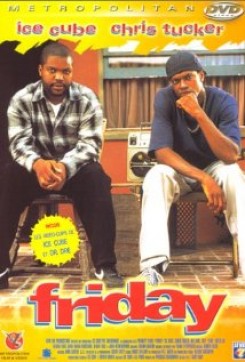 Friday is a story in the life of two best friends and the trouble they get into in only one day, Friday. Craig, approximately 18 years old, was fired from his job on his day off. When he went to his employer to collect his paycheck, he was accused of being seen on videotape ripping off the place. After knowing Craig, we know that this is not so. Smokey is Craig's best friend. He earned his name by selling and smoking marijuana. Smokey's mother is aware of what her son does for a living, but is so involved in her own life, that she doesn't care. In any case, Smokey is such a funny lovable kid, that one can't help wanting to protect him. Recently, however, Smokey has been smoking more marijuana that he has sold. Smokey's connection, "Big Worm", has not received any money and is threatening to break his arms and legs if Smokey does not come up with the money. Because Smokey is so high, he laughs it off. Now that Craig has lost his job, he and Smokey hang out together this day, Friday. His father had suggested that Craig go to work at the same place he works. Craig's dad works for the local animal control and Craig has no desire to go into the same line of work. His father tells him that since he is not working, he must take out the trash and answer the phone if it rings. Therefore, Craig and Smokey just hang out on the front porch occasionally speaking to their friends and dopers who buy marijuana from Smokey. At one point, as Smokey is smoking some more marijuana, he suggests that Craig smokes some also. Craig agrees, and they both get silly together. However, Craig starts hallucinating and things just go downhill from there. Deebo, a big dumb bully, comes by and steals Smokey's bike because he claims that Smokey owes him "protection" money. Then Deebo makes Smokey break into the neighbor's house to steal money. This is only the beginning. The rest of Friday is a day nobody cares to repeat in a life time.

There are two scenes in which animals appear. Because Craig's mother is still at home, Smokey is unable to light a joint, so the two wander over to Smokey's house where it is safe. In Smokey's living room we see a pet ghila monster sitting perfectly still on a branch in his cage. The only other animal action is seen at Craig's neighbor's house where he has homing pigeons in a cage in the backyard.