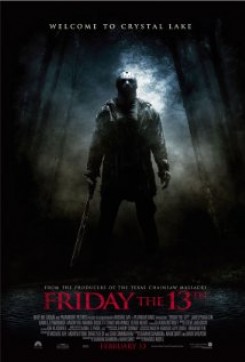 A group of young adults takes a trip to a cabin, which happens to be near the old camp where Jason Voorhees (Derek Mears) killed several campers in the past. They explore the old campground and meet a man named Clay (Jared Padalecki), who is looking for his sister, who mysteriously disappeared a few months ago.

Clay (Jared Padalecki) knocks on a woman's door. A dog jumps up against the door and barks and growls at him. When the two are finished talking, the woman grabs the dog by the collar and closes the door. The dog and the actors were introduced to each other before filming began and the actors were instructed on the dog's proper handling. One trainer placed the dog on its mark by the door and another trainer, hiding behind the actor outside the door, cued the dog to jump up on the door and bark and growl. The door was secured with extra hinges so it would not open when dog jumped on it. The street was closed off to traffic and the grounds were checked ahead of time for safety.

Production provided documentation that the taxidermy animals that are seen in the cabin in some scenes were props.

Due to limited resources or late notification, American Humane did not monitor the scene in which birds take flight.