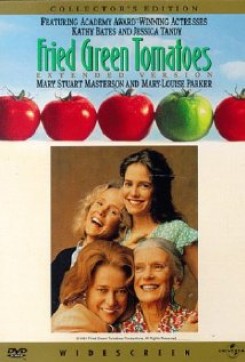 Fried Green Tomatoes is a warm comedy-drama set in the deep South. The fine cast headed by two Academy Award-winning actresses will have you laughing and crying at the same time. Evelyn, a dowdy, middle-aged, overweight housewife, searches for meaning in her miserable existence. On a visit to a nursing home she meets Ninny Threadgoode, an endearing octogenarian. The pair swap recipes for fried green tomatoes, and the seed of friendship is sown. Ninny's colorful recollections of her youth in Whistle Stop, Alabama prove to be the tonic that turns Evelyn's life around. She keeps returning for visits with her friend and for another inspiring yarn. Ninny's vivid flashbacks to half a century ago tell a tale of bigotry, an unusual murder, and the bonds of friendship and love that will have you just as captivated as they did Evelyn.

Animals are primarily atmosphere in the flashback scenes to the rural South, such as chickens and other farm animals. In one scene a carriage horse reacts to an automobile, is skittish and rears. The horse was a trained rearing horse responding to the trainer's cue. There is a scene in which a lead actress intermingles with a hive of honeybees. The actress did the stunt herself and was not stung. A professional bee handler supervised the scene.