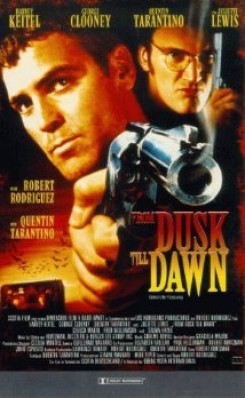 From Dusk Till Dawn

From Dusk Till Dawn is an action horror film about two brothers, Seth Gecko, who is a murderer, bank robber, and kidnapper, and his deranged younger brother, Richard. Richard stages a prison break for his brother, Seth, and the two escape for Mexico. While in route they rob a bank in Abilene Texas, killing a policeman and taking a female teller hostage. In the midst of their flight from the bank, Richard gets shot in the hand which prompts Seth to stop at a hotel to regroup and get supplies. Warning Richard, who has a history of rape and molestation in his past, not to harm their hostage, he leaves the two behind at the hotel to phone his contact in Mexico. When he returns, he finds their hostage on the bed lying dead in a pool of blood. With everyone looking for them, they must now find another means of transportation to get across the border. When Seth returned to the hotel after getting supplies, he had noticed a man with his son and daughter checking into the hotel. They were driving a Winnebago. Seth decides that the Winnebago and the family driving it would be the best cover for getting across the border. He and Richard kidnap the three and take them and their vehicle into Mexico to their rendezvous site, the Titty Twister Bar. The story takes a bizarre turn as the brothers and their hostages find out that the bar is actually an old temple taken over by Mexican vampires who need human sacrifices to stay alive. The killers and hostages become comrades, battling the vampires through the night while they try to find a means of escape. By dawn few mortals are left to tell about their bizarre night at the Titty Twister Bar.

When the group is attempting to cross the border into Mexico, they are stopped by the boarder police who are using canines in their search for Seth and Richard. A policeman, with his dog on leash, enters the Winnebago and the dog proceeds to sniff the interior of the floor and doors, but finds nothing. For this scene the dog was merely walked on a leash by his trainer who posed as the police officer. Filming was done on a hot day, so specially designed booties were worn by the dog to protect his feet when walking outside on the pavement. In a scene at the Titty Twister Bar, a woman is dancing while a snake crawls on her upper torso as she moves. This scene was shot in cuts. The actress was prepped with the snake prior to any actual shooting so she would know how to handle it. The trainer merely placed the snake around the actress' shoulders and the snake moved naturally.