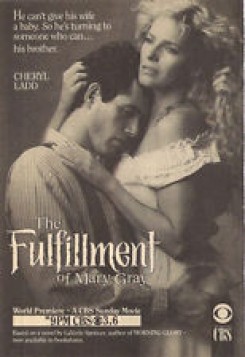 Fulfillment of Mary Gray, The

The setting for Fulfillment is a homestead in rural mid-western America during the early part of this century. It was a time when life was simpler and the roles for men and women were less complex. It was also a time when the rules for behavior were more clearly defined. This melodrama explores the complexities and consequences that result when one of those basic rules is broken.

Mary and Jonathan work their modest farm where Jonathan has hopes of buying a bull to start a herd for beef. They happily talk about their future plans over a dinner celebration with Jonathan's brother, Aaron, who is visiting after a long absence. Mary and Jonathan have been married for seven years and desperately want a child, but a childhood bout with the mumps has apparently rendered Jonathan incapable of fathering a child. He asks Aaron to father a child with Mary. The request surprises and upsets both Mary and Aaron and neither one will consider it. Jonathan still considers Aaron his last chance for fatherhood and encourages closeness with Mary in various subtle ways, such as dancing. When he feels the time is right, he leaves Mary and Aaron alone on the farm as he goes off on a trip to purchase a bull.

Animals are present performing a variety of tasks natural to the setting. Horses pull buggies or wagons or are ridden. Chickens, goats and cows graze freely. A cow is milked and a pet dog lends atmosphere to several scenes. When Jonathan brings the bull home, he is hitched behind the wagon where he walks a short distance. Later Jonathan feeds the bull hay by hand as he talks to him.