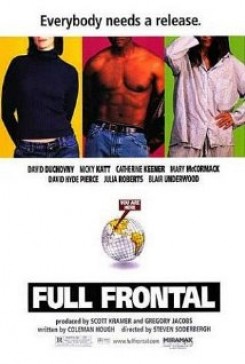 Full Frontal is a film about reality, voyeurism, and the layers of lies told to make a film. In short, it's a vastly entertaining and intelligent meta-movie - a story that cleverly turns the film's audience into its subject by never letting us forget that we are "watching." Director Steven Soderbergh's foray into digital filmmaking introduces Lee and Carl, a bored couple on the rocks (Catherine Keener and David Hyde Pierce), a reporter and her subject (Julia Roberts and Blair Underwood), a melodramatic actor and his indifferent director (Nicky Katt and Enrico Colantoni), and, finally, a dissatisfied massage therapist (Mary McCormack). We follow their stories throughout the film, self-consciously waiting for their lives to intersect.

I Knew A Dog, Django

Carl owns a dog named Django, which was played by Tyler, a Cairn Terrier and Dachshund mix. An obviously pampered pooch, Django is seen languidly resting on his owner's bed or trotting around the house, and later has his belly rubbed. To achieve this mild action, trainers placed Tyler on his mark and verbally cued him from off-camera to "stay" or "come."

Unfortunately, Django gets into some hashish-laden brownies and makes himself ill. Carl finds his dog in a closet, lying prostrate on its back. Carl gently touches his belly, but Django is unmoved. Carl proceeds to pick up the dog, his small head loosely drooping over Carl's arm, and holds him while he phones a veterinarian for help. To achieve this, a trainer placed Tyler on "lie down" and "stay" commands and hid in the other half of the closet with the dog to help him hold the positions. The dog appeared limp in Carl's arms with the help of verbal cues from an off-camera trainer, who told Tyler to "stay" and keep his "head down." Soon, the veterinarian arrives and examines Django. Again, trainers cued Tyler to stay still while the actress gently "examined" him.

Nicky Katt portrays an actor whose current role is Hitler in the psychoanalytic play, "The Sound and the Fuhrer." In certain scenes within the play, a large black dog appears, either lying at Hitler's feet or on his bed. The dog was actually owned by actor Nicky Katt, who cared for him both on-set and off.