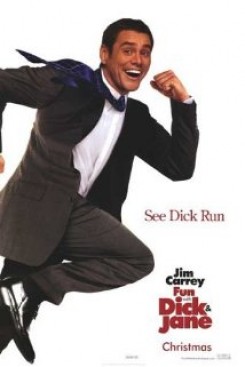 Fun With Dick And Jane

Job insecurity strikes at all levels, as Dick and Jane Harper (Jim Carrey, Téa Leoni) discover in this remake of the 1977 comedy now updated to include an Enron-esque corporate scandal. Hilarious high jinks follow when the dearth of employment opportunities forces the Harpers to resort to a life of petty crime to pay their mounting pile of bills.

In an opening scene, the Harpers' terrier mix "Spot" barks at the front door. Dick then puts a bark control collar on him as a deterrent, and the electric shock makes the dog jump and twitch in the air. This collar was a prop and had no batteries in it. The shock effect was created using computer generated imaging (CGI) mixed with the real dog, a terrier mix named "Salty". The production filmed several takes of this sequence to generate a lot of footage from which to create the final effect. Trainers cued Salty to speak and jump up and down in front of a green screen. They sometimes lifted Salty in a soft, sling-like harness, or by hand to get all four feet off the ground for the "zapped" effect. The trainer pulled back Salty's head in one take to get something approximating an 'ouch!' surprised look, and his hands were digitally erased during post production.

Later, Spot sits beside Dick on the sofa and tries to writhe out of the shock collar. When Dick tries on the collar himself, and finds the effect as unpleasant as Spot does, the dog barks happily. The trainer used the verbal cue of "take it off" to get Salty to paw at the collar, and cued the dog to speak when Dick got shocked. The "No Bark" Collar had no batteries and was loose enough to slide over the dog's head without unclipping it.

At the laboratory where Jane volunteers to try a Botox alternative, a capuchin monkey is seen wreaking havoc in the background. On cue, the trainer had "Crystal" the monkey jump from his shoulder onto a table, and then verbally cued her to pick up some small plastic containers and throw them at the lab technician. All glass products were removed from the table. The capuchin was prepped with all noises that accompanied the scene, and with the actor playing the lab tech, so as to feel comfortable performing the action. The lab contained small plastic rodent containers with small pieces of fur inside to look like mice.

During Dick's efforts to restore his landscaping, he steals a bush and discovers a dog urinating behind it. A dachshund mix named "Tyler", who played Odie in Garfield the Movie, performed in this brief scene. An off-screen trainer cued the canine to do a trained leg hike while pumping fluid through transparent aquarium tubing taped to the dog's belly.

Former Globodyne employee Mark Fish gets busted for cockfighting in one scene. Two trainers dressed as animal control officers each carried a cage with a chicken inside as they walked down a driveway. Later, a chicken flies onto a table near Mark as Dick and Jane give him a check. In this case, a trainer dropped the chicken onto the table from just out of frame. The room was closed off; trainers prepped the actors with the chickens; and, according to the Certified Animal Safety Representative monitoring the production, both Carrey and Leoni worked very well with the birds.

The entire family —including Spot—drives along the beach in a convertible in the final scene. A helicopter was used for some angles in this sequence, and the aerial shot was filmed from much higher than the 50-foot minimum that American Humane's Guidelines require. Trainers rode in the camera car while Salty was secured in the back seat and held by the actor.