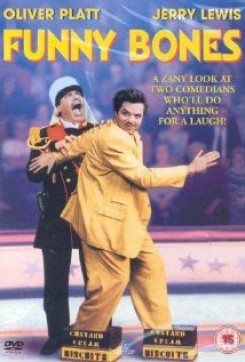 Comedy is not always a laughing matter. Comedians get most of their material from pain and disappointment. So is the case of Tommy Fawkes who is a second generation comedian trying to follow in his father's footsteps. His father is a famous Las Vegas comedian, George Fawkes, who has been loved by audiences for years. Because he feels that he has not lived up to his father's expectations, Tommy's debut in Las Vegas is disastrous. His writers have advised him against certain jokes but Tommy rebels and tells them anyway. He bombs shortly after he is introduced. In shame, and also because his girlfriend has dumped him prior to his stage debut, Tommy flees to Blackpool, England. Not only was Tommy born there, but at one time Blackpool was a mecca center for comedians. Under a different identity, Tommy hires an attorney to find various clowns and circus performers in hopes that he can see them and pilfer really funny material. He tells them that he hasn't long to live. During his search for really funny material, Tommy crosses paths with Jack Parker and his family. Jack is a very funny, but unusual young man. . After a great deal of searching for comedy material, Tommy learns that his father, George, and the Parkers' lives are connected. It seems they share secrets from thirty years ago. We learn that when Tommy's father was just starting out, George pilfered comic material from the older Parkers who had at one time been part of his act.

Animal action is mild. Prior to Tommy's arrival, we see Jack on a pole threatening to jump. Two llamas watch as Jack declares that the only way he will come down is if his mother brings him toast. She does. It is then that we learn that Jack's dog's name is Toast. Throughout the film, Toast is Jack's constant companion. Tommy watches various comedy acts. Some are circus acts which include animals. A man stands next to a burro. A dog is on a table and woofs as a lady plays piano. A poodle standing on her hind legs pushes a baby carriage. A dog sits up in a chair with a newspaper as if reading. Other animals seen are a rider on a camel going from A to B, a guard feeding his cat, a lady walking a poodle on a leash with one in her arms, and a man putting snakes on a man doing a trick. All of these acts were part of the Robert Brothers Circus. In the beginning of the film, we see sea gulls flying in the air. This was stock footage. There are several background animals such as chickens crossing the road and dogs on leashes being walked. This movie was filmed in England. American Humane was represented on the set by an affiliate.