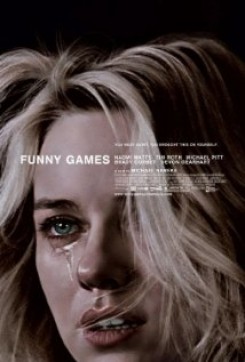 Two disturbed and cruel young men enter a couple's vacation home under the guise of being the neighbors' close friends. They then hold the couple and their son captive, torturing them and playing mind games to the death.

The family golden retriever, Lucky, enters the vacation home and begins a series of actions around the house. He sniffs the living room furniture, walks up and down the stairs, jumps on George's (Tim Roth) back when he bends over, and shoves his head into the refrigerator as Ann (Naomi Watts) puts food away. These scenes were filmed on a secured indoor set. Two dogs, Gable and Kelly, were alternated for the role of Lucky. The dogs were well-rehearsed to follow trainers' commands and to walk up and down the stairs. Trainers released a dog on his mark and called him to other marks. To get the dog to sniff around the couch and other furniture, trainers rubbed a treat scent on them. The dog ran to the scents, sniffed for treats, and upon discovering no treats, moved on. To get the dog to stick his head in the refrigerator, treats were placed inside. To get the dog to bark, trainers gave a verbal command to "speak." For the scene in which George and his son prepare the boat and the dog is heard whining and yelping, these were merely sound effects.

Production provided documentation that a dead dog in an SUV was fake.

Due to limited resources or scheduling conflicts, American Humane did not monitor all of the dog action.