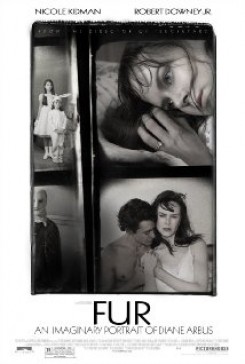 In this inventive turn on the biopic genre, Nicole Kidman embodies famed photographer Diane Arbus, considered one of the boldest artists of the 20th century. When Arbus meets her eccentric new neighbor Lionel (Robert Downey Jr.), this 1950s housewife finds herself torn between love for her husband and children and her obsessive need to create and explore.

During a fashion show, a model poses with a serval (a wildcat) in a diamond studded collar and leash as she models a serval fur coat. A trainer handed the leash to the actress just before the cameras rolled and used a lure of dangling meat on a bait stick to make the long-legged wildcat walk. To familiarize cast and crew with the proper way to work with a serval, trainers held a safety meeting prior to filming.

In a few scenes, a white rabbit hops around, jumps on a chair or lies on a table in Lionel's apartment. In one shot, Lionel picks up the rabbit, pets it and then sets it back down. Two white male rabbits named Charlie and Frankie were alternated in the role of Lionel's pet. Charlie was a "hopper," so he was cast when the scene called for the rabbit to move around. A trainer placed the rabbit on mark and scattered some food on the floor to encourage the rabbit to move about. To get Charlie to jump up on a chair, trainers placed food there to encourage him. Frankie was more of a "holder" and stepped in when the rabbit needed to stay still. Downey Jr. received instructions on the correct handling of the animals before filming began.

In one scene, as Lionel serves tea to Diane, he also brings a bowl of food to his pet ferret sitting atop an ornate chest. To prepare for this shot, the props department constructed a wooden stand, which was placed inside the top of the chest where the ferret stood. It was covered with thick fabric to ensure the ferret's safe footing. A trainer placed the ferret on mark and dribbled several drops of its favorite liquid food on the stand to keep it in place and engaged as the cameras rolled. During a later shot when the ferret walks around the bathroom sink as Diane looks in the mirror, trainers again scattered food and placed the ferret on its mark. Two trainers stood off camera holding nets attached to long poles, just in case the animal decided to wander off.

According to the Certified Animal Safety Representative monitoring the film, when Downey Jr. learned that the ferret's name was Stinky, he immediately rechristened her Timmy, declaring the name was better for the animal's self esteem. Cast, crew and even the trainer took up the name change for the duration of the shoot.

A professional groomer off camera gave instructions to the actors on the proper brushing of two white poodles for one scene. The caged birds seen in Lionel's apartment were placed there by a trainer after the enclosures were inspected and approved. The production provided documentation for the animal carcasses and furs seen throughout the film. This documentation certifies that the props were fake or that no animal was harmed for the purpose of the production.

Although absent from the theatrical release, American Humane also monitored a scene in which Diane photographs Lionel as he holds his animals. Each animal was filmed separately and in full compliance with our Guidelines for the Safe Use of Animals in Filmed Media.