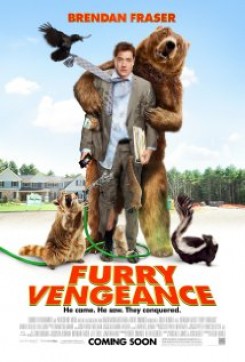 When the head of a real estate development firm threatens to destroy a large area of wilderness, the creatures of the forest seek vengeance on a development executive. When he tries to explain his "critter revenge" theory to his family, they think he is losing his mind.

All grounds were inspected for hazards and sets were closed and secured. Cast and crew members were introduced to the animals before filming and instructed on their proper handling. Much of the animal action took place in front of a green screen. Stuffed animals were used for rehearsals so as not to tire out the animals. For shots in which a large group of animals of different species is seen on screen together, they were either filmed separately (and digitally added together) or they were computer-generated imagery (CGI)

All of the animals in this film were highly trained "actor" animals who were well-rehearsed for the action, most of which was mild and simply involved a trainer cuing the animal with commands, bait sticks, buzzers, or other common training methods. The animals were surrounded by off-camera trainers or costumed trainers.

For shots that show an animal near a moving vehicle, the vehicle was filmed separately (without the animal present) and then the footage was added together in post-production. Whenever animals were in a vehicle, a trainer hid in the backseat. Any item an animal pushed or held was a lightweight prop. A cigar seen in one scene was not lit — the smoke was a special effect. Various animals shown attacking Dan (Brendan Fraser) were either props or CGI.

For the scene in which Dan sprays a squirrel with a sprinkler, the direct spray was a safe distance from the animal. The indirect "mist" did hit the squirrel, but the squirrel loved it — so much, in fact, that it refused to stop playing in the mist.

For the shot in which a raccoon looks in a window, a trainer held it below the window. Raccoons in all shots were either surrounded by trainers or had harnesses on their bodies. For a scene in which a raccoon pulls a treadmill plug out of the wall, it was trained to "get" the specially placed plug, which was rigged to come out easily. The outlet was not supplied with electricity.

Birds were equipped with a tether or harness, held by an off-screen trainer. All birds in this film were trained to fly from one point to another, and the vulture that flew away was CGI. The bird that flew to the window was cued to fly and tap the glass. For a shot in which Dan is pecked, the bird was cued to peck at the air, and the actor was filmed separately and digitally added in later. For another scene in which a bird appears to pull up some window shades, the bird was cued to fly into the bathroom and grab the shade cord while crew members actually pulled the shades up.

A ferret seen on a roof was placed on the roof of a mock house (like a dog house) and cued.

Skunks that are seen walking into a car were cued to walk one at a time up an incline formed by a bag and into a stationary car. A trainer inside the car then set them on the ground on the other side of the car, where a second trainer retrieved them. When the vehicle moved, the skunks were not in the car. Later, the skunk and a raccoon were cued to bite at non-working car wires, as if hot-wiring the car.

The bear in the movie was a well-trained bear and was filmed without many people on set. First, it was cued to stand and wave its arms. It was then cued to push a mini-porta-potty prop (a small-scale model, to make the bear appear larger) and roll it a few feet. Later, the bear was cued to honk the horn of a vehicle, which trainers slowly pulled forward a few feet.

For shots in which men hold possums by their tail bases, the men were costumed trainers. The animals in cages were made comfortable, and those out of their cages were kept a safe distance from each other. When more than one animal is seen in the same cage, they were from the same litter. The cages in the compound were secured to each other. Only a few animals were actually filmed and then digitally duplicated and composited together to make it appear as if there were more animals on the compound. For the scene in which the animals push themselves out of the cages, the doors were rigged to open; the animals were released separately and were not loose on the set at the same time.

The bees and all the animals at the party in Dan's dream were CGI. All animals at the forest festival (running out of the car and down the slide) were CGI or digitally added.