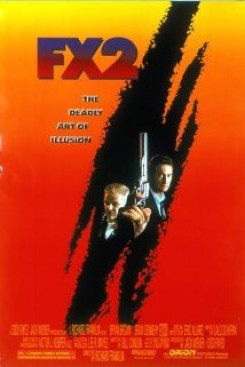 Rolly, an expert special effects man turned toy inventor, lives quite comfortably in his New York apartment with his girlfriend Kim and her son. Rolly has been asked by Mike, the boy's father who is a New Your police officer, to assist him in the capture of a murdering woman slasher. Rolly finally agrees to help Mike with the case and uses his FX expertise. The N.Y.P.D. has set up a stake out at the apartment of a young model, Mike being the bait dressed up with special effects to double as the girl, but something goes wrong. Mike is murdered by another man who sneaks up behind him. The whole thing had been a set-up! Rolly calls his friend Leo for assistance. Leo had once been on the police force, but has now turned private investigator. They finally discover that the mob is implicated and all this was being done because of an unsolved case of Mike's involving six gold coins that had been sculpted by Michelangelo that were never found. After numerous attempts on their lives, they retrieve the coins and return them to the church.

In one scene where Rolly is being attacked in his apartment by Mike's murderer, the man shoves Rolly's head into a large fish aquarium to drown him. Rolly then grabs a gun and shoots through the aquarium, breaking through the glass and the fish flop out along with the water. According to the producer, this scene was shot in cuts using real and fake fish. The fish that actually fell from the aquarium were all fake. Other animal action in the movie was simple, showing a cat that jumps into a man's lap to be petted and another scene where two guard dogs follow a trail of hot dogs left for them. This film was made in Toronto, Canada, therefore there was no American Humane representative on the set during filming.