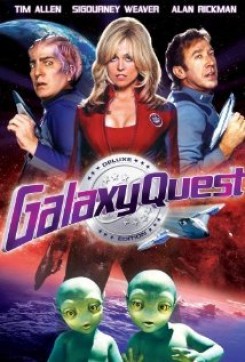 Galaxy Quest is a comedy about a group of actors whose careers are going nowhere. Their only success has been to portray the crew of a space ship on the 70's sci-fi series, Galaxy Quest. They have nothing better to do in their lives but attend conventions and interact with their geeky fans until an alien race contacts the captain of the TV series and enlists the fictional heroes to help save their planet. This time, unfortunately, the quest is real.

There is a scene where Alexander, a crewmember of the Galaxy Quest, is served insects for his dinner. A bowl is placed in front of him and the bugs are seen in the liquid. Alexander picks up a spoon and a small bug jumps off and back into the bowl. For this scene, fifty leeches, thirty millipedes, twenty roaches and a variety of pre-deceased bugs were used. A lovely piece of liver was placed in a bowl filled with water and food coloring for the leeches to cling to. All of the bugs had a jolly good time. No te: It is common practice for many of the professional bug wranglers to save the deceased bodies of insects that die of natural causes. These are later used as "props" to add numbers to scenes that call for a wealth of creepy crawlies. In another scene, dogs are seen being walked on leashes by people, their actual trainers, dressed in alien attire. For morestories on animals and their celebrity humans and other movie news go to "Reel Pets" at www.animalfair.com or see Animal Fair Magazine.