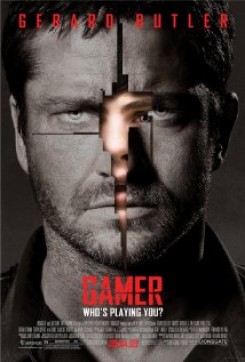 In the future, people can participate in a multi-player game in which they are paid to have computer chips implanted in their brains and be controlled by gamers who "play" them in real-world simulation. A prison inmate nicknamed Kable (Gerard Butler) agrees to play a similar game, after which he will be released — if he can stay alive.

While outside, in a rave-like environment, a woman has a dog on a leash. As a taxi tolls by, the dog appears to urinate on the woman's leg. For this brief scene, a trainer placed the dog on its mark next to the woman's leg, handed the leash to the actress and cued the dog to "hike" his leg up. The camera cut away and then "urine" running down the woman's leg was added in post-production. The electric taxi was carefully driven a safe distance from the dog, which was unfazed by the action.

For a scene in which a bird on a woman's open palm flies away, the bird was computer-generated.

Due to late notification or limited resources, American Humane did not monitor the fish, sharks and rays in the aquarium or any of the worm or spider action.