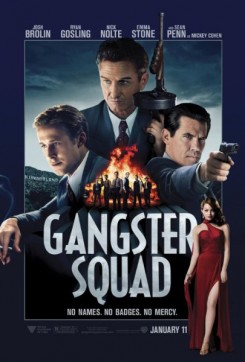 Gangster Squad follows a group of LAPD’s finest in their battle against notorious gangster Mickey Cohen in 1940’s Los Angeles.

Modern Los Angeles is not known for its farms and ranches. However, LA’s terrain was much more rural and less urban in the 1940’s when suspense thriller, Gangster Squad, takes place. As a result, the film features some interesting animal action, for which the American Humane Association was on set to monitor.

Truly one of the most interesting (and disturbing) scenes in the film is when gangster Mickey Cohen (Sean Penn) has his henchmen tie a man’s hands and feet between two cars, then orders the cars to drive in opposite directions, ripping the man apart. And if that weren’t enough, he feeds the poor guy’s remains to a couple of coyotes. Ouch!  Not to worry, no coyotes or gangsters were harmed in the making of this film. This scene was accomplished by stuffing a fake torso with pieces of meat. Trainers then verbally cued the coyotes to eat the meat in the fake torso. The coyotes fed on the torso and the director called cut!

In another scene, the members of the gangster squad run out of a casino near a ranch area, chased by the cops. During the ensuing shootout, the Josh Brolin character opens the horse pen to throw off the cops as a distraction and the horses run past all the characters during the shootout. In executing this scene, trainers placed six horses in a pen separate from the one closer to the ranch. The trainers placed hay in the portable pen and walked them back and forth several times to pattern them. On action, the horses galloped out and headed for the portable pen. Actors used “non” guns, no projectiles, just a pop and a flash. The horses were checked on between takes to make sure they weren’t too startled by the fake gunfire.

In the scene where a bodyguard patrols front of Mickey Cohen’s mansion with a guard dog, the dog was on a leash and acclimated with the actor before shooting. Likewise, the scene where Mickey Cohen walks with his dog, “Mickey Jr.” and hands the leash to one of his henchmen before beating up another guy, the action of the two guys fighting happened at a safe distance from the dog. According to our AHA Representative on site, the dog patiently watched the action as if nothing was happening.

In the scenes where the pair of lovers lie on grass with Mickey Jr. and overlook the city with Mickey Jr. on a leash, trainers were just off camera cuing the dogs with verbal and hand signals. The actors were also introduced to the dog prior to filming so they felt comfortable with each other.

The bear was a taxidermy for which production provided documentation for.

The seagulls on the beach were caught in their natural habitat.