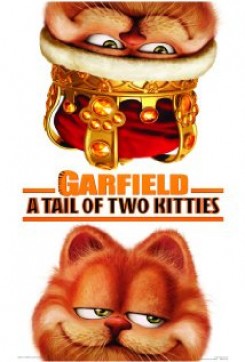 Garfield: A Tail of Two Kitties

In a new spin on the classic tale The Prince and the Pauper, America's favorite feline, Garfield, grabs his canine pal, Odie, and stows away on owner Jon Arbuckle's (Breckin Meyer) trip to England. A case of mistaken identity finds Garfield unwittingly switching places with the regal "Prince" of Carlyle Castle. At first, the royal treatment suits Garfield perfectly. That is, until the malevolent Lord Dargis (Billy Connolly) hatches a plan to rid Carlyle of all regal felines.

In several sequences, either Garfield or his doppelganger Prince addresses a crowd of barnyard animals residing at Carlyle Castle. These royal subjects include a horse, a bull, a peacock, goats, a rat, a macaw, a ferret, ducks, a hare, swans, a pig, chickens, and geese. Though the audience of animals appears abundant, in reality a split screen was used and only one or two animals were filmed at a time. The footage was then layered together to create a single composite image.

Trainers placed the animals on a variety of marks—upside-down barrels, a railing, boxes, baskets—and used bait sticks and toys to elicit looks or cue them to bow their heads. On animals for which reverential kneeling represented an anatomical challenge, computer generated imagery (CGI) effects were used. Safety requirements included laying down non-skid mats to stabilize footing, harnessing the animals between takes or removing them from set to allow adequate rest time, and educating cast and crew on how to behave around the animals.

Garfield decides it's high time the Brits learn to prepare his favorite meal, and many of the animals get in on the lasagna-making act. While it appears utter chaos rules this scene, much of it was filmed against a green screen with individual animals and their off-camera trainers. Action included having the goat crush tomatoes in a vat, the mouse shredding parmesan cheese with a rodent exercise wheel, and the goat head-butting the lasagna pan into the oven. Trainers used verbal and visual cues to achieve each of these memorable performances. Animals filmed together were released at patterned intervals to eliminate confusion or congestion, such as the birds flying across the kitchen. Trainers hid edible rewards on or near various kitchen props to encourage the animals to follow an A-to-B path, and all critters were acclimated to their lightweight culinary accoutrements during extensive rehearsals.

Production built an eight-inch platform around the kitchen table to elevate some of the vertically challenged animals, and trainers hid beneath the table holding their harnesses as the cameras rolled. When the animals sit around the table and later converge on the last piece of lasagna, each animal was filmed separately against a green screen and all food on their plates was either fake or species-suitable.

Lord Dargis vs. the Animals

While Dargis sits at his desk, the duck and rabbit conspire to set up a mousetrap on his desk, to which the man's finger inevitably falls prey. After the mousetrap was situated on the desk, a hidden trainer lifted up the rabbit so it could nudge the mousetrap forward slightly. To prevent any potential injury to the animal, trainers removed the spring from the trap before filming.

In a scene where Dargis holds the solicitors hostage, Odie jumps up, grabs the seat of Dargis' pants, and won't let go. Trainers prepped the dog to grab a hanging piece of fabric attached to the actor's jacket after getting Odie worked up by wrestling with a favorite toy.

When Odie's distraction plan fails, the ferret crawls up Dargis' pant leg to do some damage of his own. This sequence was shot in cuts, and the ferret actually ran up an altered pant leg worn by the trainer that had an exit hole at the knee. An ace bandage was wrapped around the trainer's shin to provide traction for the animal and protection for the human. Though it appears the ferret scuttled out of Dargis' waistband, the animal really crawled onto Connelly's abdomen by way of a tube set up through the actor's jacket.

In one scene, Garfield baits Rommel into chasing him through the topiary garden and straight up to the bull. Special effects allow the two animals to face off for a moment, and then Rommel turns tail and the bull thunders after the rottweiler in hot pursuit. To establish the chase shot, a trainer released Rommel and cued him to run to an awaiting trainer at an end mark. Once the dog was a safe distance away, another animal handler released the bull and cued it to run to a fourth trainer. There were no aggression issues between the bull and dog, and pickup riders remained off camera to corral the animals if they decided to wander.

Dargis tries to incite Rommel's aggression for Prince by showing him a painting of the fat feline while holding a hunk of raw steak behind the canvas. Rommel then jumps through the painting, which production had scored like a spider web and taped back together in the middle to make it give way easily when the dog leaped into it. The rottweiler had tacky pads on his paws during this scene to prevent slipping on the parquet floor.

The animals celebrate with a pool party during the final credits. This elaborate scene required extensive rehearsals and safety protocols to be in place. The pigs lounging in the Jacuzzi benefited from a carpeted ramp and stairs that allowed them to safely enter and exit the spa. Two geese, two ducks and two cows are seen in the pool, though this action was shot separately so that animals of different species were never together. Trainers accompanied the cows into the water and stood off to the side during filming so they would not appear in the scene. The water temperature was a comfortable 75 degrees with a properly neutralized pH to make it safe for the animals.

The accessories that the animals wore poolside were both comfortable and stylish, and all flotation devices were modified when needed for the action desired. When the ferret makes a big splash in the pool, the scene was actually filmed against a green screen with the animal doing a one-foot jump off a prop diving board set up on dry land and cushioned by furniture pads.