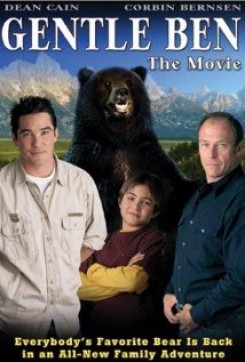 Gentle Ben is a remake of the classic story about the touching friendship between a boy and a bear. Dean Cain stars as forest ranger Jack, uncle to Mark (Reiley McClendon), the boy who befriends a misunderstood wild bear.

AHA ensured that all of the animals featured in Gentle Ben were provided with a healthy and pleasant housing environment, which included a two-story log duplex in the middle of a verdant forest. In addition, a spa-like pool and sprinkler system were set up for the comfort of Bonkers, the 8 year-old American Black Bear that played Ben.

While Bonkers the bear was on set, no food was permitted - except what was provided by the trainers - for the safety of both the animal and the humans. AHA also ensured that Production locked-up traffic on nearby highways while the bear was working.

In the opening sequence, Ben sits alone in the forest watching an airplane in the sky. The trainer placed Bonkers on his mark and cued him to look up from off camera using a beeper and food pan to guide his eye line.

Ben soon gets into trouble when he curiously sniffs at a bit of fencing on the ground and accidentally falls into a mine shaft. The trainer placed some food on the ground to lure Bonkers over to the area, while the falling was actually shots of Bonkers rolling around and then edited together to simulate a tumble to the bottom of the shaft.

Mark and his friend Ashley hear the rumblings of the trapped bear and go over to see Ben stuck in the hole. Concerned for the trapped animal, they drop food inside the shaft and the bear eats it. Later, Mark lowers a bucket filled with milk and thirsty bear drinks it. Bonkers, who has quite an indiscriminate palette, enjoyed the variety of munchies offered throughout filming, including salmon, grape jelly, and cooked chicken. The trainer would merely toss the food over to the bear - who was not actually stuck in a mine shaft and could, in fact, move freely - and he would happily gobble it up.

Still trapped inside the mine shaft, Ben puts his front paws on the wall and pulls on a wood panel. Ben yells in frustration. The trainer cued Bonkers to stand and pull at the wall and growl on command from off camera. Bonkers was amply rewarded with treats for his efforts.

Unlike most American Black Bears, which are highly energetic, Bonkers is a laid-back and mellow bear who got along famously with his cast mates. You could call him a people-bear, which made him perfect for the role of Gentle Ben. Bonkers, therefore, had no trouble filming this next scene involving Mark, who, determined to free the bear, lowers a ladder down into the shaft and attempts to show the befuddled bear how to climb it. Suddenly, he slips and accidentally falls in with Ben. The bear growls at Mark and he quickly runs back up the ladder. Taking his cue, Ben climbs up the ladder and out of the hole. Finally free, Ben rumbles and sits down, prompting the wary boy to run away. For this particular scene, the trainer cued the bear to react from off-camera, again using a beeper and food pan. In addition to being a deft ladder-climber, one of Bonkers' special skills is bouncing up and down, a talent that unfortunately didn't make it into the movie. For all of the bear's actions, however, while Bonkers and his cast mates were great friends, the bear never took his eyes off of his trainer - and his reward!

Ben follows Mark and they walk side by side and chat. Later, the bear watches Mark read a book. Ben stands up and growls like the picture in the book. To achieve these actions, trainers set Bonkers on his mark and cued the bear from off camera using a food pan.

Mark tells Ben to run and the bear reluctantly crosses the stream. The trainer placed Bonkers on his mark and cued him to stay. On action, the trainer cued Bonkers with a beeper and food pan to cross the creek, which was approximately 3 to 4 inches deep and had been cleared for debris prior to filming.

Ben continues walking on the trail. Mark and his friend Ashley pet the bear in order to rub their scent on him and throw the hunters off his track. Bonkers loved the attention from the actors, and was happy to stay in position until the director's "cut.

Near the end, Ben stand and growls, and later, sits with a group of people. The trainer cued the bear to stand from off camera and similarly cued him to sit and stay in the later scene.

Two erstwhile conservationists are out to find Ben with hunting hounds. Trainers placed the hunting dogs, named Little Man and Ace, on their marks with the cast members after laying down a scent trail for the dogs to follow. On action, the dogs naturally followed the trail, pulling the actors with them. At one point, the hunters find a fox they'd killed. This was actually a prop made by the production.

Soon, the men let their dogs run free after the scent. The dogs spot a deer and bark at it. Trainers called the dogs to "come" from off camera and rewarded them with treats. The deer was filmed separately.

Throughout the film, two friendly dogs sit in the back of a pick-up truck, and a few people pet them. Trainers placed and secured the dogs on their mark in the truck and removed them once their scene was complete.

A flock of sheep grazes in a field. A bear walks by and then two wolves walk by, eyeing the flock. It is implied that one of the sheep is attacked. Late in the film, there is another implied attack - nothing is actually seen. Trainers placed the sheep in the meadow and scattered food on the ground for them to eat. From off-camera, a trainer would prompt the sheep to move in a certain direction. The reaction shots of the bear and wolves were filmed separately.

A man holds a sheep part, presumably from the one that was attacked. This was a fake prop.

A wolf named Harvey walks into the empty road. Ashley shoos it away and it runs. Later, Harvey appears again and startles Jack and company. The trainer placed Harvey the wolf on its mark and verbally cued it from off camera.

A deer eats in the woods. It walks off and Mark follows it. He finds the deer standing among various animals, including chickens, a rabbit, a possum, a raccoon, and Harvey the wolf. Mark pets the possum. Mark learns that the deer's name is Arnold and the rabbit is Max. A trainer placed Prince the deer on its mark and verbally cued it to go from A to B. Several trainers cued the various animals to stay in their positions from off-camera and scattered food on the ground for them to eat.

While camping out at night, several birds fly out of a bush, startling Mark. Production purchased four Ringneck Pheasants at a local ranch and trainers released the birds two at a time into the camera frame. The birds were natives of the lake area filming location.

Wild geese fly over the lake. This was natural.

Jack puts a whole fried fish on his nephew Mark's plate. The dead fish was purchased from a local market.