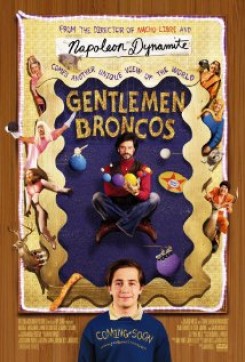 Benjamin (Michael Angarano) writes a fantasy story and submits it to an author he admires during a workshop he attends. He finds out later that someone stole his story.

Dusty (Mike White) opens the trunk of his car and takes out a large snake. He holds the snake around his neck and it defecates on him. The trunk was checked ahead of time for hazards. Trainers placed the snake in a burlap sack and put it inside the trunk right before the cameras rolled — the sack was digitally removed in post-production. The actor was instructed on the handling of the snake and the trainer stood nearby at all times. The defecation was computer-generated.

Later, Dusty enters Benjamin's house with the snake around his neck and walks into the living room, stopping behind the couch that Ben and his mom are sitting on. The trainer placed the snake on the actor's neck right before filming and he entered the house and walked to his mark and stood there. A trainer retrieved the snake right afterward.

Ben and Dusty blow darts at some action figures they have propped up on a bench. The cat crawls on the bench and Ben aims at it with a dart but hits his mom instead. A trainer placed the cat on the bench next to a doll with a fake dart in it. Trainers used food and verbal cues to get the cat to come and stay. No dart was ever blown while the cat was present.

American Humane did not monitor the brief horse, dog and wolf action or some of the cat action.