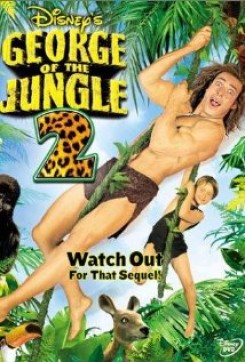 George of the Jungle II

This family comedy follows the adventures of George, King of the Jungle (Chris Showerman) and his wife, Ursula (Julie Benz). They now have a son, George Jr., who George Sr. hopes will follow in his footsteps. However, the animals of the jungle begin to get upset about George spending more time with his family than he is with them. More trouble arises when Ursula's mother arrives to try to persuade Ursula to return to civilization. Meanwhile, George's gorilla brother, Ape, has taken up gambling in Las Vegas. He calls for George to help when he runs up a large debt. While in Vegas, the evil Lyle Van de Groot, working with Ursula's mother, hypnotizes Ursula and makes her forget who George is. Back in the jungle, a lion persuades the animals to follow him while George is gone. George and Ape must rescue Ursula and make it back to the jungle to stop the lion and Lyle from taking over George's kingdom.

Many of the animals in this movie were created using CGI (Computer Generated Imagery). George's pet elephant, Shep; the toucan, Tookie; and other animals, including lions, tigers, water buffalo, snakes, bees and birds were all created with CGI. This technique allows the "animals" to appear to do actions that would be dangerous or impossible for real animals to do.

All of the gorillas in this movie, including Geroge's brother, Ape, were either animatronic creations or people in gorilla costumes.

During the game of coconut ball that George plays with the gorillas, we see a donkey acting as a goalie. To prepare for this scene, the donkey was familiarized with the "coconut ball" and the gorilla costumes that would be used in the scene. Goalie gloves and leg bands were placed on the donkey's front legs, along with a fern "necklace" on her neck. The donkey responded well to the costuming. She had a chance to get used to the gorilla suits and the ball before the "gorillas" began the game and proceeded to run towards her kicking the ball.

Birds were also used in the coconut ball game for reaction shots. The birds were watched by the trainer, but allowed to roam free with their wing feathers trimmed just enough so that they wouldn't fly off into the surrounding jungle. You may be able to spot a couple of macaws, a sulphur-crested cockatoo, a corrella, and several parakeets in this scene.

These same birds are used throughout the movie in the jungle scenes for reactions to different events. During each of these scenes, the birds were treated with care. They were offered water frequently and kept out of the sunlight if filming went longer than expected. The birds remained healthy the entire time.

A water buffalo also watches the coconut ball game. The buffalo was kept in a secure metal pen until it was time for it to be in the scene. The trainers got it to look left and right by tossing a loaf of bread back and forth just off-camera.

Part of the movie takes place backstage at circus show in a casino. Two Malamute dogs and a pony were used in this scene. Both the dogs and the pony were kept on leashes and were led by their trainers. The action was very mild and the pony reacted well to the filming, as did the dogs.

Monkeys were used in several scenes, most notably in one of the final sequences when the jungle animals unite to help George fight off evil construction workers. Each of the animals in this scene was filmed separately. Each of the monkeys used (a chimpanzee, a Rhesus monkey, and a capuchin monkey) were kept on leashes for safety purposes.

A python was used during the scene where the jungle animals help George, and it too was filmed separately from the other animals. Its trainer made sure that it got the proper attention, and the only action required was for it to crawl from one point to another.

Several big cats (lions, tigers) are seen in the film, but none were actually on the jungle set with the actors. All of the cats were filmed separately in front of a green screen, and then manipulated with CGI. So, in scenes were the actors appear to have close contact with the cats, as in the scene were George wrestles the lion, the actual lion was filmed separately in a completely different location, and then added into the scene with digital effects.

During one scene, Lyle tries to impress Ursula by catching a horse, and he runs around in a corral with several horses. This doesn't go as planned, however, and he ends up dragging behind one of them. For this scene, a lightweight dummy was used for Lyle, so there was no damage to either the actor or the horse.