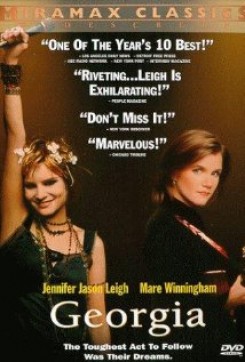 Georgia is a very depressing present day drama set in Seattle, Washington. It tells the story of Sadie, who tries to emulate her famous rock star sister, Georgia. Sadie is not successful though, and her life takes a turn for the worse when she turns to alcohol and drugs to ease her pains of failure. We watch as Sadie's life progressively and steadily goes downhill on a self destructive course, while Georgia seems to have everything anyone could possibly want. Georgia and her husband, Jake, are constantly having to come to Sadie's rescue. Finally, Sadie is so strung out on heroin that she has no one else to turn to except Georgia, who takes her in once again. But this will be the last time, as Georgia can no longer take the very erratic lifestyle that Sadie lives. With Georgia's seemingly endless love and support, Sadie recovers from her heroin addiction. She returns to the night club scene to resume her career as a singer, but once she is out of Georgia's care, the whole cycle begins all over again, ultimately to her demise in this painfully drawn out film.

Animal action is mild and minimal. In one scene Sadie, Jasmine, her for-the-moment agent/boyfriend, and his cat are traveling to Washington to pay a surprise visit to Georgia. Jasmine's cat is seen lying in the back seat of his convertible. To accomplish this shot, the cat, who was on a leash, was placed in the back seat of the stationary car by his trainer. The trainer instructed the cat to "stay" and attached the leash to the back seat area, while staying close to the cat from out of the camera's eye. A small fan was placed nearby so that the cat's fur would blow slightly to create the illusion of movement. The car was never moving while the cat was inside. The cat is seen again in one other scene exiting the car at a gas station where Sadie and Jasmine have stopped for gas. The trainer called the cat to come, using voice commands and a clicker with food as a reward. Horses are present in two other atmosphere scenes. In one scene, two horses are seen being led into the barn at Georgia's ranch home as it starts to rain. In the other scene, a horse is shown grazing in the pasture.