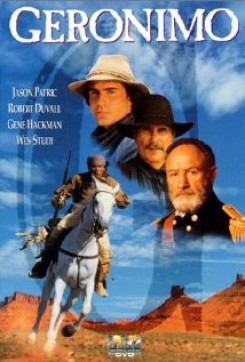 Told in a semi-documentery style, Geronimo: An American Legend depicts the final years of the great Apache leader. The story is told with voice-over narratives by Britton Davis, a second Lieutenant with the U.S. Calvary. Lieutenant Davis was twenty-two when he was assigned to a small contingent that was sent to the Mexican border for the sole purpose of escorting Geronimo safely back to a reservation in the United States. Geronimo had agreed to surrender himself peacefully. Lieutenant Davis feels compelled to relate the true facts surrounding the final months of the Geronimo Campaign of 1885-1886 because of all the distortions that have been written. From his eyewitness account he attempts to set the record straight on the people and events which led to the tragic and violent Apache outbreak in May 1885. His story tells of broken promises and misunderstandings as Geronimo is pursued and eventually captured. Animals are prominent throughout the film with most of the intense action involving horses. Chickens are seen as background atmosphere and mules are either ridden or used as pack mules.