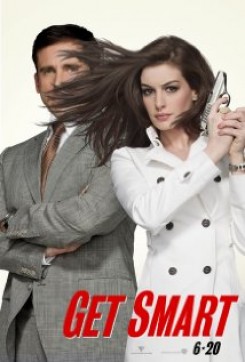 When the U.S. spy agency Control is threatened, its desperate chief apprehensively calls in Maxwell Smart (Steve Carell), a zealous and often maladroit agent, and teams him up with the organized and competent Agent 99 (Anne Hathaway). Together they try to foil the evil organization Kaos' master plan.

A puppy bites Max (Carell) on the ankle. A trainer wrapped a piece of beef in some cloth and placed it in the actor's sock before filming began. After the puppy was released from its crate, another trainer standing near the actor called the puppy. The puppy began to nip at the actor's ankle to get to the beef.

Agent 99 (Hathaway) rises up inside a phone booth holding the puppy in her arms, then exits the booth and walks down a long hallway. The phone booth was an elevator. A trainer handed the actress the puppy moments before filming and she held it throughout the shot. The actress was introduced to the puppy before filming and was instructed on its proper handling. Trainers stood just off-camera during this mild scene.

Max and Agent 99 walk through a drain tunnel and encounter some rats crawling around. The custom-made drain tunnel was on a secured indoor stage. Actors walked down the middle of the tunnel, which had been filled with three inches of tap water before filming began. Several rats were placed along the side walls where it was dry. Trainers hid in turn-outs every 20 feet along the side of the tunnel to help guide the rodents. Food was scattered around to entice the rats to crawl, and flashlights were shone on them so the actors could see them and not scare them or step on them.

Max is outside a pet store talking to a puppy who sits in the window looking at him. A platform was built and secured inside the store window to ensure the dog's safety. The platform was padded and the puppy wore a waist tie that was held by a trainer who hid under the platform. An off-camera trainer stood behind the actor, holding toys and food to get the puppy to look in certain directions. A trainer put a macaw in a large cage and placed it outside the pet store. Two doves were placed inside a cage inside the pet store near the puppy in the window. These birds, which were accustomed to being inside their respective cages, were allowed to do whatever came naturally.

Due to limited resources and/or scheduling conflicts, American Humane did not monitor all of the rat action or any of the goat, pig, horse or chicken action.