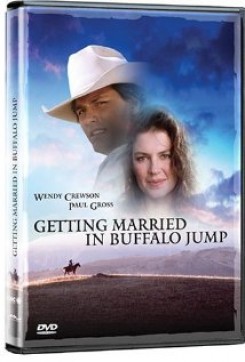 Getting Married In Buffalo Jump

Getting Married In Buffalo Jump is the story of how one city girl, Sophie, discovers herself and the true meaning of love by returning to the farm where she was raised. When Sophie's father dies, he leaves his ranch to her in his will. Much to her mother's disapproval, Sophie decides to stay on the ranch and make it a working ranch again. She hires one of the local men, Alex, to work for her on the farm. She discovers that Alex was a former school mate. The two make a great working pair, and Alex comes up with a business proposition. Marriage! Sophie is taken back by this suggestion, as she has always thought that people get married for love, not business. Alex is persistent though, and, as she realizes she can't run the farm alone, she agrees to marry him. She has second thoughts though when she learns that Alex has an illegitimate son. The mother is an Indian woman who lives near by. Sophie, thinking that Alex had deserted his previous family, breaks off the engagement with the crushed Alex. Sophie realizes that she has fallen in love with Alex and she goes in search of the woman and child wanting to know more about their relationship with Alex. Sophie discovers that Alex did not walk out on the woman, but that the woman kicked him out! The remainder of the story will reveal if Sophie has found this news out in time to keep Alex from leaving her farm and her life.

This movie was filmed in Canada with cows, horses, dogs and geese seen in their natural surroundings as background. Also, Sophie and Alex are seen in several scenes riding horses through the country side. There is a scene in which Sophie and Alex attend a rodeo. This was stock footage of an actual rodeo that was inserted into the movie in post production. American Humane was not on this set, but after screening the movie and talking with the production company.