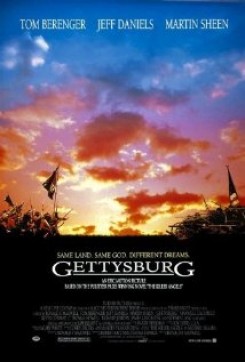 Gettysburg, the four-hour depiction of just three days of the Civil War, illustrates the horrors of brother fighting brother, friend killing friend, and the brutality of the Battle of Gettysburg, in which 50,000 Americans died. This film is based on the Pulitzer Prize-winning novel by Michael Shaara, The Killer Angels. The movie begins by tracking the movements of both Union and Confederate troops as they converge upon Gettysburg on June 30, 1863. Confederate Generals Robert E. Lee and Peter Longstreet are alerted to the Union's presence by a spy who happened upon a Union cavalry unit. On July 1, Colonel Joshua Chamberlain's Union camp, which had yet to move into Gettysburg, is awakened by the arrival of 120 mutineers from a now-defunct regiment from Maine. Chamberlain successfully integrates these men into his unit by reminding them of what the war is about and what is at stake. These men become instrumental in holding off the confederates in the battles to come. Other Yankee troops already at Gettysburg, lead by General John Buford and his aide Devin, recognize the need to hold onto their strategic position on the ridge East of Willoughby Run--"the high ground"--until reinforcements show up the next day. Dawn brings the first Gettysburg battle between the two warring factions, during which Buford puts himself in danger by sitting on his horse in the midst of cannon fire and bullets. The fighting is bad, but Buford's limited troops succeed in holding the Rebels off until General John Reynolds and his men arrive. They are welcome additions to the Union forces. On the Confederate side, General Lee worries that they engaged the Yankees prematurely, with General Longstreet not yet prepared and without even knowing the whereabouts of General Jeb Stuart, who should have been aware of the Union's proximity. Lee, sitting on his horse, appears to be discussing the situation too near the continuing battle. When the Union troops show weakness, Lee wants to take the hill. Longstreet and Lee argue about strategy--Longstreet wants to retreat and reminds Lee that being defensive will help retain troop strength; Lee knows this confrontation at Gettysburg will be a deciding factor in the outcome of the war, and wants to proceed aggressively. During the night, Lee makes plans for the morning's attack: Generals Hood and Longstreet are to attempt to get behind the Union forces by rushing a small Union-occupied hill to the side of the main body of Union forces. Hood accepts the orders, but speaks out against rushing the hill--known as Little Round Top--citing guaranteed loss of at least half his men. The ensuing battle is brutal, as Hood's men attempt attack after attack on Little Round Top. As Hood predicted, many of his men die rushing the hill. Bayonets are picked up when bullets become scarce. The Union's Colonel Chamberlain holds the hill, thus defending the flank of the other Union troops, who retain possession of the highlands all together. The following day, in a desperate attempt to defeat the Northern forces, General Lee orders one last attack on the Yankees--right up the middle. Lee guessed the Union forces would be weak in the middle because the ends proved themselves invincible. But the center proved strong too, and most of the Rebels were killed by cannons and gun fire before ever reaching the Union troops. When surviving Rebels reached the Yankee troops, they were too weak to fight effectively. At this incredible loss of life and undeniable defeat, General Lee admitted to making a terrible mistake.

Horses appear throughout the movie, from the opening scene of a Rebel spy riding along a wooded hilltop, to the closing scene of a horse-mounted General Lee admitting defeat. Before the North and South clash at Gettysburg, officers, cavalry units, and couriers ride horses over slow sloping hills and through fields. The horses generally keep a slow pace, but at times gallop, although never dangerously fast. Throughout the movie, horses are seen in the background, either grazing or being ridden uneventfully. One trained horse is seen rearing in the Rebel camp. During the first confrontation, horses are ridden into battle, trot between combatants, and pull wagons and cannons. Although cannons appear to be discharged in the vicinity of animals, the cannons fired only smoke, and cannon fire sounds were later added. Throughout the movie, quarter loads were used in the guns, with the sounds of gunfire also being dubbed in later. In one scene a horse appears to be knocked to the ground by cannon fire. This was filmed separately and away from the battle scenes. A trained falling horse performed a lay-down for this scene. During and following the battle, dead horses--which are fake corpses--scatter the field. The second major battle scene contains similar images: fake dead horses lying about, soldiers shooting from the mount, and smoke signifying cannon fire. Also during this battle, Union forces retreat, with men riding horses away from Rebel soldiers. The last day of the fighting at Gettysburg begins with the Rebel cavalry riding down an easy slope at a slow gallop. The ensuing march includes horses, and therefore more fake horse corpses and cannon and gun fire. Other action includes a horse performing a lay-down to appear to have been shot. Two horses pull a wagon that overturns as the horses run free. For this scene, a break-away wagon was used to allow the horses to run away from the wagon safely. All animal action was monitored by the American Humane Association with the assistance of the Humane Society of Carroll County in Maryland.