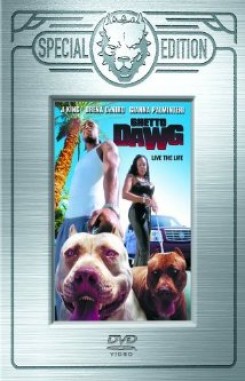 Ghetto Dawg follows an ivy-league grad named Tariq (J-King) who, after struggling to find legitimate work after college, turns to the bloody and illegal underground world of dog fighting to make ends meet. He decides to reevaluate his lifestyle when love enters the fold, and his fighting dog King starts to become one of the family.

Many dog lovers will find much of the animal action depicted in Ghetto Dawg disturbing and violent, as it stages the inhumane and illegal world of dog fighting. American Humane was contacted by the filmmakers to monitor the animal action in the film and witnessed simulated dog fighting; when AH was present on the set, no real dog fighting occurred. The animals were healthy and well cared-for, and the fight scenes were achieved with clever camera angles and fake blood and battle scars. Upon viewing the film, however, AH noticed that there is one fight scene that we were not notified to be present for, one in which it appears that contact between the animals occurred.

The producers of the film attest that at no point did the dogs make contact, and that all aggression was simulated. Yet the fact that AH cannot verify this information disqualifies the film from receiving a "No animals were harmed…™" end-credit disclaimer. Since AH can confirm that all of the animal action in the film was achieved humanely and within our guidelines, AH is rating the film Believed Acceptable.

The dogs in the film were privately owned family pets and were accompanied to the set and cared-for by their guardians. Tariq's dog, King, was played by an 8 year-old pit bull named Capone, while Fang was played by a spirited 3 year-old pit named Skunk. Several other family pets rounded out the canine crew: Jawz, Thorn, Princess, Britney, Kane, and Peanut.

In the opening scene of the film, a man walks into a barn and shoots his dog from off camera, which is implicitly lying in a haystack nursing her puppies. He leans down and picks a puppy up out of the hay as another pup watches. No dog was shot during filming. The puppies were 14 weeks old and were accompanied by their guardians to the set. The actor was instructed on how to properly and gently handle the pups.

During a scene at the horse racetrack, horses stand in stalls while others are being raced on the track. A horse is led to a stall while a man pets it. Filmed at an actual racetrack, the horses stood in their stalls as the camera dollied past them. The actors led one of the horses back to its stall and affectionately pet it along the way.

In preparation for one of their violent fights, the dogs are weighed by being hung from a leash. While in the ring, the dogs bark violently at each other and strain against their leashes. For the weighing, the dogs were attached to a safety harness and were suspended for about 3 to 5 seconds. The fight itself was simulated and the dogs were not allowed to be loose together in the ring. The actors held each dog by their leash while an off-camera crew member held a plush toy in front of the dogs, which excited them. Close ups of the dogs show them wrestling with a plush toy covered in faux fur to match the color of the dog they are supposedly fighting.

On television, a man holds back a snarling dog on a leash in the pen. The dogs viciously fight each other in the pen. This was stock footage and was not filmed for this project.

One of the fighting dogs, Fang, is brutally injured during a fight. Now rendered useless, his owner decides to shoot it. In reality, the dog is neither wounded nor shot. Fake blood and makeup was applied to the dog to make it appear injured and no dog was present when any gunfire occurred.

Showing his increasing role as a family pet, King lies contentedly on the floor as his family eats at the dinner table. David, the young boy, feeds King scraps of food under the table. Later, scenes that show King frolicking on the beach are intercut with harsh images of King's fight training. The dog happily played with the actors while on location at the beach and also happily accepted treats from the younger actor at the dinner table. An AH representative was on set to ensure that the training sequence was humanely achieved.

In the last brutal fight scene near the end of the film, two dogs appear to make contact, in contrast to the previous fight sequences, in which the dogs are not shown together in the same shot. AH was not notified of the filming of this scene and cannot verify that contact was made between the dogs. The producers attest that no actual fighting occurred, and that all of the dogs are in good health.