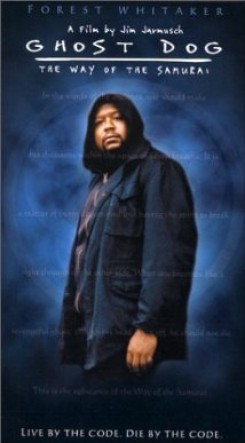 Ghost Dog: The Way of the Samurai

Ghost Dog: The Way of the Samurai dramatically paints a portrait of an African-American hit man who follows Hagakure's Way of the Samurai. Known in his urban neighborhood as Ghost Dog, he leads a life of simplicity in a roof top shack, shared with a flock of homing pigeons. Eight years earlier his life was saved by a mobster and Ghost Dog chose to repay him by becoming the man's retainer. When the mob decides that Ghost Dog is more liability than asset, they seek to kill him. They begin by killing his friends and his birds. This becomes a challenge in philosophical focus for the urban samurai warrior.

The homing pigeons used in the film were Bronx Racers and trained to the area in which filming took place. The trainer supplied the cages that acted as their home on the set and in the film. The actor, Forest Whitaker, needed to appear to be very bonded to one bird in particular. To achieve this, he prepped with the bird in pre-production, learning how to handle the bird properly and even took it home to live with him. The bird was trained to land on the set near where the others of his flock were housed. When the birds are seen flocking in an overhead swirl, the shot was achieved by going to the homing area of the actual birds and filming their return. Two hundred birds were supplied for the film so that 50 birds per take could be used for four different shots. The scene where a bird is chased around the room was filmed in cuts. The trainer tossed the bird gently and the actor ran around wildly. All the birds that appear to be victims of the mob's revenge were fake birds. Extra feathers were supplied from a commercial chicken processing plant and dyed to more closely resemble the feathers of the hero birds. The loose feathers were strategically placed by the prop department. When Ghost Dog is stalking his prey in the woods of upstate New York, a Scarlett Tanager and a Woodpecker are viewed as if through a rifle scope. To achieve this effect, production went on location in Bedford, New York and filmed birds in the wild using telescopic lenses. In another scene, a bird is seen perched on a gun barrel. For this, the trainers placed their trained pet canary on the gun perch. In another scene, Ghost Dog encounters two hunters who have just killed a bear. The Samurai stops to "talk" to the hunters, but doesn't necessarily agree with their philosophy. The dead bear was supplied by New York State Department of Fish and Game. The animal had been killed, confiscated by the authorities and preserved as evidence prior to the use by the film company. There is a canine that encounters Ghost Dog in several scenes. The animal actor was placed by the trainers and cued to sit and stay, eye to eye - Dog to dog. Questions or Suggestions ghostdog@ahafilm.org