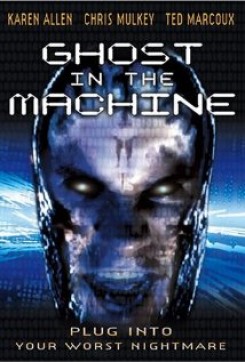 Ghost In The Machine

Ghost in the Machine is a science fiction murder mystery about a psychotic computer hacker with a penchant for murder. The hacker secretly steals personal address books from people. He then torments his victims via telephone and computer as he systematically kills their friends and family. After a horrific car accident, the severely injured hacker is rushed by ambulance to a hospital, where heroic efforts are made to save his life. A tremendous lightning storm is raging outside the hospital and just at the moment of the hacker's death, a bolt of lightning causes a power surge which transfers the hacker's brain impressions to the main frame computer of the M.R.I. where the hacker had been undergoing a brain scan. This enables the hacker to perpetuate his evil and violent rampage after death, through the use of computers and electrical machinery.

The hacker's final victim is a single mom and her son who have a pet dog, Axl. Axl is present in several scenes, eating or going in and out of the house by way of a doggy door. All of the dog's actions were accomplished by verbal cues from the dog's trainer with food as a reward. Trainer number one would release the dog as trainer number two would call to the dog. One night when Axl is home alone, the TV suddenly goes on which gets Axl's attention. As Axl watches the screen he sees a dog swimming in a television film. He immediately goes out the doggy door to the backyard pool where he stands looking into the water. Later that night a dead Axl is seen floating in the pool. A fake dog was used to portray the dead dog in the pool.