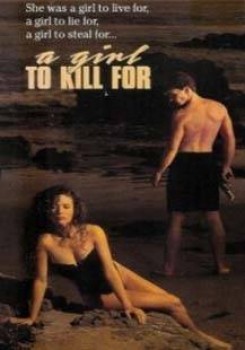 Girl To Kill For, A

Where does "the game" end and reality begin? That's the dilemma facing Chuck, an Ohio transfer student who meets Sue, a beautiful coed, while registering for classes at Pepperdine University. Chuck is a bit of a wimp as the seductive Sue manipulates him to do her bidding under the guise of a game. They have so much fun beating the bill at an expensive restaurant that Sue persuades Chuck to steal a flashy sports car and break into a high-rise office building after hours. They are nearly caught but make a daring escape down a window washer's platform and flee in the sports car. When Chuck decides he's had enough, Sue confesses it was all a game and she was just teasing him. She says the car is hers, she has an account at the restaurant, and the office is her uncle's. When she tells Chuck they are so great together that they could even kill someone just for the thrill, Chuck can't be sure if she's serious or joking.

While Sue is driving the car, she hits a dog that runs into the road and she's very concerned. The dog's leg is injured and they bring the dog home to treat it and the dog recovers. To achieve the impression of the dog being hit, the scene was staged so that the film could be run in reverse. Rather than the car moving toward the dog, it was actually moving away. The dog was made up with stage blood and was trained to go limp giving the impression of being unconscious.