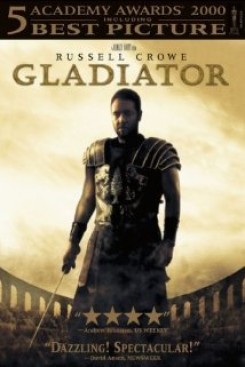 Gladiator is a historical epic about a Roman General named Maximus, who fights bravely for his emperor, Marcus Aurelius and later is betrayed by the emperor's son and heir, Commodus. Maximus is exiled and sold into slavery only to fight his way back to Rome as a vengeful gladiator. The gladiatorial spectacles that were staged by Commodus in the Coliseum in Rome, were supposedly reenactments of great historical battles and, often, pitted man against beast. Foot soldiers were asked to spar against fully armed charioteers and wild animals such as tigers stalked their human prey. Emperor Commodus believed he would gain the support of the people by giving them excitement and bloody entertainment, but he never expected his plan to create a hero of his enemy.

Early in the film, Maximus leads his troops against the Teutonic army of Germania in the name of the Roman Empire. This bloody battle is fought on horseback, with the Roman mascot, a wolf, fighting at his master's side. Soldiers fought primarily with swords and long bows. Flaming arrowheads were fired into the wooded battle zone and fireballs were hurled to burn out the German barbarians. Per a report from The Royal Society for the Prevention of Cruelty to Animals (R.S.P.C.A.) in Great Britain, these scenes, filmed in Allice Holt Forest in Surrey, used approximately 100 horses including trained falling horses. When a horse is seen being speared, the stunt was accomplished with a mechanical horse and in some instances other animal robots were used. Two dogs, Belgian Shephards, doubled as the wolf and were conditioned to run with the horses. The R.S.P.C.A. monitored some of this action in the UK although was not present throughout filming. Per production, for background atmosphere throughout the film, many farm and zoo animals were used on location in Morocco and in Malta. Domestic animals, such as camels, sheep, and goats, were supplied by local owners in both locations. Wild animals were supplied by the Zoo in Rabat for the Moroccan portion of filming and were overseen by the zoo's veterinary staff. Per information received from production and the head trainer, Gladiatorial battles that involved the live tigers were filmed using several digital techniques of split screen and green screen. When the tiger appears to be stabbed and then lies dead, a fake "stuffie" tiger was substituted for the live animal. Production states that a veterinarian was on set at all times during the scenes using the tigers. There are many birds, vultures, eagles and falcons, seen in various scenes in the film. Per production, the birds were supplied by French owner/trainers and traveled from France to Morocco for the shoot. AHA understands that the animals were safely used and then returned to France, accompanied at all times by their owners. Per production, two elephants were also imported for the film from Germany and returned after a couple of weeks on set. In the scenes where charioteers fight gladiators who are chained together on foot, there are numerous horse falls. As the chariots are overturned, horses are seen to fall as the chariot carriage breaks apart. At one point, the horses appear to be falling on each other. Per production, to create these effects, several fake horses on tracks were used. American Humane Association has received information regarding the animal action from production, the head animal coordinator and the R.S.P.C.A. in Great Britain. The Disclaimer that appears in the end credit crawl regarding the animals, was issued by production and is not an authorized AHA disclaimer. Based on the information AHA has received we are rating Gladiator "Believed Acceptable".