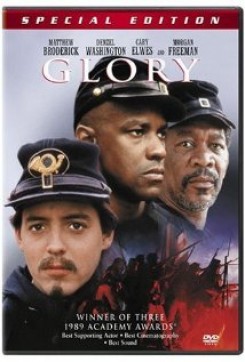 The film Glory tells the story of a disillusioned white man, Colonel Robert Shaw, who fights in one of the bloodiest battles of the Civil War (Antietam) and later forms and leads the 54th Massachusetts Volunteer Infantry, the first black regiment to see battle. Shaw shares many hardships with the men of his regiment. The White army resents them, the Confederate army has decreed, "that any Negro taken in arms against the Confederacy will be returned to slavery"..."any Negro in a Union uniform shall be shot" and any White officer taken in command of Negro troops shall also be shot." Shaw wins many battles for his regiments equality. The black men get new shoes and receive equal pay. When his troops are used for stealing contraband from burned towns and homes, he puts his "stripes" on the line to get them into battle rather than be used for labor alone. In the battle of Fort Wagner, he and his men have the opportunity to lead the Union army into battle. Bravely and courageously they meet the Confederate army and their own death, resulting in bodies piled high into a pit with no kind words offered or funeral services performed. It's a meaningful and heroic moment in American history that has somehow been forgotten. Today, on Boston Common the Shaw monument has forever frozen in bronze the 54th and Colonel Robert Shaw marching out of Massachusetts and into Glory.

The animal action for the most part is very mild. Shaw on horseback oversees his troops. Wagons, carts and carriages are pulled by horses. A black soldier has a goat which he leads on a leash. What appears to be a dead horse in the middle of a battlefield is a stuffed prop.