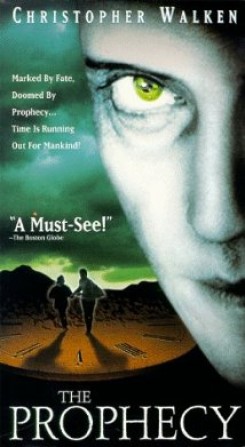 God's Army is a present day film that deals with angels who have fallen from God's Grace. Gabriel, the most resentful of the fallen angels, is determined to not only destroy heaven as we know it, but to also take command. In order to complete this blasphemous mission, which is considered the second war in heaven, Gabriel must suck the blackest souls of the Universe out of deceased individuals. Gabriel's latest victim is to be Colonel Hawthorn, a man who died, with the blackest of heart and soul. Because of his hedonistic heart and soul, the Colonel was the direct cause of unnecessary death and destruction. In the meantime, Simon, who is also a fallen angel, becomes aware of Gabriel's mission, so he takes the Colonel's soul so that Gabriel can't get it. He sneaks into a church, where the Colonel's body lies in state, and sucks the soul right from his mouth. Because Simon takes control of the Colonel's soul, several other fallen angels have beaten and abused him and his strength is failing. He hides in an abandoned school classroom waiting to die. One afternoon a little Indian girl by the name of Mary plays with a couple of her classmates upstairs from their classroom. Mary starts wandering around the room and finds Simon on the floor. She asks Simon if she can help him and goes to get him some food. Upon her return, Simon, knowing he hasn't much time, blows the Colonel's soul into little Mary's body. After Mary has left the room, Gabriel appears to Simon and tries to recapture the Colonel's soul. Knowing that the soul is gone, Gabriel conclusively kills Simon. The only way to kill a fallen angel is to rip its heart out and burn the body, which is exactly what Gabriel does. However, Gabriel must still find the Colonel's soul. Shortly after Mary has left Simon, she becomes ill and vomits. Catherine, her teacher, drives Mary home. Mary lives with her grandmother on a reservation. Her grandmother takes her to a Shaman on the reservation who can get rid of the bad soul that has made Mary so ill. Gabriel learns that Mary has the Colonel's soul and fights desperately to get to her before the Shaman can cure her. Lucifer appears to aid in Gabriel's capture. He has no intentions of having Gabriel take Hell away from him. In the end, the Good prevails over evil as Lucifer eats Gabriel's heart. The war is now over.

In the scene where Simon enters the abandon classroom, a rat scurries across the floor. Simon gently moves it out of the way with his foot. For this scene, the trainer was dressed up as Simon and gently moved the rat. After Gabriel has left Simon's charred body in the abandoned classroom, the rat runs over the ashes. In another scene, as Lucifer leaves, he raises his arms and a flock of pigeons fly out of his body. This scene was filmed in cuts on a stage. Perches were set up behind a silhouetted screen. When the trainer released the birds, they simply flew back to the perches behind the screen.