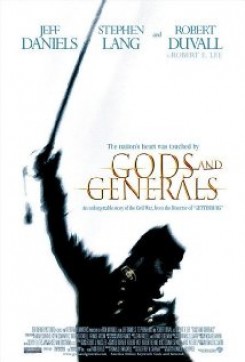 Gods and Generals follows the rise and fall of legendary war hero "Stonewall Jackson". The story is from the book by Jeff Shaara and documents the early days of the Civil War, focusing on Confederate General Robert E. Lee and the Union's Winfield Scott Hancock and Joshua Lawrence Chamberlain. These soldiers played key roles in the battles of First and Second Manassas, Antietam, Fredericksburg and Chancellorsville. This is the prequel to the 1993 hit Gettysburg.

There were several months of preparation spent on this production. American Humane (AH) was on the set from the beginning of production and throughout filming which took place at several historical sites. The first task was to check all of the paperwork and medical records of each horse involved. Once a clean bill of health was determined, the rehearsals began. Numerous horses were used by Civil War Re-enactors to participate in battle sequences with gunfire, cannons, and explosions going off all around them. The owners are also the riders who have staged these re-enactments often, so the horses are very comfortable both in the situation and with their riders. AH has extensive Guidelines that re-enactor riders must follow to insure the safety of all horses during filming.

The other horses that were used were brought in by professional movie wranglers who also doubled as actors whenever possible. The movie horses were prepped with the loud sounds of gunfire, cannons and explosions that were staged from a safe distance and were used to these sounds when filming finally began. Some of the horses were stunt horses that were trained to rear up or fall down on command and were ridden by experienced stunt riders. When a horse was cued to fall, an area was dug ahead of time and filled with mulch so the ground was soft and the action fully choreographed. Then the area was camouflaged with dirt and when the trainer standing off camera cued the horse to fall down, the stunt rider jumped off and the horse landed on the soft mulch that cushioned the fall. Another trainer standing off camera retrieved the horse by the reins and led it off camera. The horse's fall is much more cushioned and controlled than the stunt rider's fall.

Another stunt that was used in the film was called a rodeo stop. This is where the experienced rider has the horse gallop fast and then stops the animal quickly. The horse keeps the weight on its back legs making the stop appear more dramatic. Only horses that were experienced with these specific stunts were used and takes of the action were limited. Sometimes the soldiers, some on horseback, stand in a line or travel in military formation. Trainers would crouch down, hide, and hold the reins of the horses to keep them still. Anytime a horse and rider rode off screen, there were several wranglers on horseback, known as pick-up riders, waiting to retrieve the horses.

Before filming began, all of the fields, roads and creeks were checked by production, the trainers, and the American Humane Animal Safety Representatives (AH Reps) to insure that any debris was removed and all holes were filled and leveled. A thick layer of mulch was placed on the road to pad it and make it more comfortable for the animals to walk on. Anytime an animal was cued to fall, the area was padded to cushion the fall. All of the harnesses and other tack the horses wore were inspected by the trainers and AH Reps. Trainers and stunt riders doubled as actors whenever a scene called for an experienced rider or a stunt horse. Numerous safety meetings were held throughout the production. Rubber bayonets were used during the battle sequences when there was contact between the soldiers. Fake prop horses were placed on the battlefield along with actors playing dead soldiers to show the aftermath of the battle. Smoke was added later in post-production to enhance the effect of the battle zone. Veterinarians were also present for intense scenes and on call throughout production.

There were three different types of explosive special effects used. Explosions set off inside a cannon, an airblast and a ground explosion. One ounce of powder was used inside the cannons. Compressed air blew out very fine Fuller's earth for an airblast and holes were dug to accommodate 2 oz. mortars used for ground explosions. These ground explosions were always placed on angles that directed the earth and dust away from the path of the horses. The horses were never close to any of the explosions, but camera angles were planned to give the appearance that the blasts were closer than they actually were. Generally they were at least 50 feet away. Large fans were placed off camera and turned on so the dirt would fly up when the armies were fighting, enhancing the intensity of the battle.

Professional trainers hitched up the horses and mules and all rigging was checked for soundness and safety. The animals were accustomed to pulling the wagons. The trainers checked the loads that were placed in the wagons to ensure that pulling weight was not heavy. One trainer dressed in costume drove the team as the others stood off camera.

In several scenes it appears as if the horses are hitched to runaway wagons after the driver has been killed. For these scenes professional wranglers acted as "blind drivers" and were positioned out of camera range behind and under the wagon bench. In some cases the stunt man would do the fall from the wagon while the blind driver controlled the horses. In one particular scene, there is a combination of liberty horses that have lost their riders, runaway wagons and foot soldiers. These choreographed sequences were shot in cuts and the horses, wagons, and soldiers entered the scene in a planned sequence. Blind drivers operated the wagons and pick-up riders were on hand to gather the horses after filming. All the liberty horses were being released and wrangled by professional riders. Careful preparation was done prior to filming to acclimate the horses to the path they were to travel. The path was repeatedly traveled by the horses, led by an attending wrangler, in ever lengthening increments until the horses were familiar with the area, the length of the run and each of the starting and ending positions.

In staging the battle of Chancellorville, it was necessary to show the army crossing the Rappahannock River in winter. For this scene a specially constructed pontoon bridge was built by production. The bridge was approximately 200 feet long and 10 feet wide. It was constructed of wood secured to pontoon boats. Straw was placed over the wood for traction and all horses making the crossing wore borium shoes. None of the horses were ridden across the bridge, but each was led by a wrangler holding the reins. The water was a depth of 4 1/2 feet at the deepest point and safety boats manned with divers were placed in the river out of camera range. The horses were released in intervals and the foot soldiers walked and did not march to prevent any wobbling of the bridge during the cross. During the course of filming, takes were done with varying numbers and groups and filmed during daylight and at twilight. Fake snow was used to enhance the winter obstacle that historically factored into this major battle.