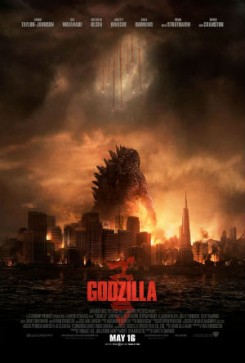 The world's most notorious monster fights creatures created by humanity's own arrogance.

In the scene where various insects crawl on plants, cast and crew were instructed by trainers to watch their step and to pay attention to where the insects were. The trainers placed the bugs on the plants. They filmed them and retrieved them after filming.

In the scene where a chameleon crawls on a tree in the jungle, trainers simply placed the lizard on the marked tree, they filmed it, and trainers retrieved the lizard after filming.

In the scene where there's a dog tied to a tree barking, reacts to the sound of the tsunami, then releases himself and runs with the crowd, the dog was prepped for weeks. The leash was on a trip so it could release quickly and never get caught up around tree or dog. The special effects department released the leash just before the trainer would call the dog.

The scenes with the birds flying in the air and the bats in the cave were all done through CGI.

In the scene where the coyote hears something in the distance then runs off, trainers cleared debris from area. On action, trainer that was standing off camera cued coyote to run from point A to point B.