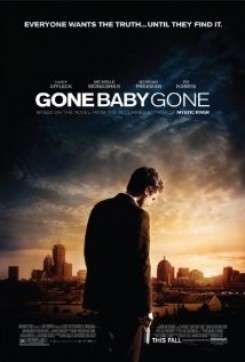 Two Boston area detectives investigate a little girl's kidnapping, which ultimately turns into a crisis both professionally and personally. Based on the Dennis Lehane novel.

Detectives find a suspect dead in his kitchen surrounded by cats. The blood on the actor and on the floor of the set was nontoxic fake blood. Eight cats were placed on marks around the kitchen and the actor slumped over the table. Trainers also scattered some cat food around to keep the cats in the area. Pens were set up around the openings of the set in case any of the cats decided to wander. Trainers stood off-camera and only necessary cast and crew were allowed on set. Two scenes show various parts of the city. In one scene, some people are sitting on a porch with a dog and in another, a dog sits on the front stairs of a house with some people. For both of these scenes, the cameraman just happened to capture these people and their pets outside enjoying the day. At a funeral, there is a horse in the background. This horse was a police horse and the policeman doubled as the actor.