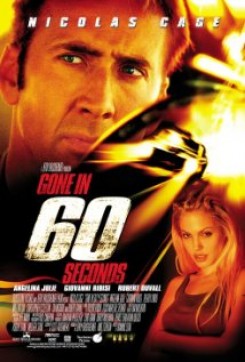 Gone in 60 Seconds is a fast-paced action adventure about "boosting" cars and staying alive. An infamous, albeit retired, car thief, alias Memphis Raines, gets coerced back into the business in order to save the life of his younger brother. He pulls together a team of crackerjack ex-thieves who create a thrill ride for the police and the audience alike.

Memphis Raines, played by Nicolas Cage, seeks out his old friends in order to put together a team of thieves who can engineer a heist so major that it will ransom his brother's life. His first stop is at the car restoration shop of his buddy, Otto. Otto's dog, Tiny, is also a car buff who favors license plates, steering wheels and car keys over traditional chew toys. This throws a wrench into the boost. Tiny is played by an English Mastiff and in one scene the dog sniffs out a small bag of keys from a table cluttered with a fast food feast. After appearing to ingest the keys rather than the burgers, it is up to the humans to find a way to get them back in a quick but humane way. We are led to believe that laxatives and long walks do the trick. The keys are retrieved off-camera. For all the chewing that Tiny does, he is actually chewing props that are rigged with yummy treats. Another car-loving critter appears on the floor of a sedan. A snake is seen slithering around the feet of two men attempting to drive the car down a winding garage ramp. Amidst some havoc, the snake is tossed out of the car and lands on the roof of another vehicle. Trainers placed the snake around the ankle of the actor and for movement used a gentle warm air current to get the snake to slither forward. When the snake is seen being hurled out of the car and landing hard, a fake snake was used. There is a brief scene with an adult Doberman Pincer and a pup of the same breed. The dogs appear to be guard dogs and the adult barks on the cue of his trainer who is off camera. Other background animals include prop chickens and fish for several warehouse scenes. They are seen for less than sixty seconds.