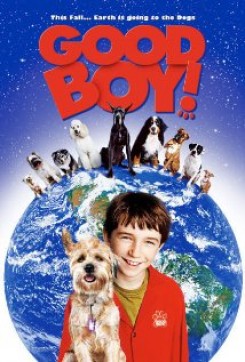 Brainy space dog Hubble travels to Earth from his home planet of Sirius to check up on the canine antics of Earth dogs, only to discover that Earth dogs have failed in their mission to take over the planet. But world domination leaves little time for frisbee and catch, and Hubble soon learns that having a loving human companion can actually be a life fit for dogs.

Good Boy features an exceptionally trained canine cast, with Border Terriers Defford, Malley, and Flynn sharing the lead role of space pooch Hubble. Hubble and his pack of Earth dog pals demonstrate a variety of tricks and behaviors throughout the film, including everything from sit and stay to more complex activities such as pool diving and meditation.

During the opening credits, several different dogs bounce around as if they are falling from the sky. The dogs were filmed jumping up in front of a blue screen and the sky was a computer effect added in post production.

Dog-walker Owen (Liam Aiken) picks up his canine clientele for their daily stroll. He gathers the leashes of a large white Standard Poodle named Barbara Ann, a Boxer named Wilson, an Italian Greyhound named Nelly, and Shep, a Burmese Mountain dog. Each doggy character was brought to life by several canine stars: Scandal and Banner played Barbara Ann, Lita and Lexi played Wilson, Motif and Imp played Nelly, and Willie and Odie shared the role of Shep. The dogs were provided with a private and quiet rest area while on set, along with fresh water and daily exercise.

On their walk, two neighborhood bullies tease Shep with a Frisbee. The young actors were filmed separately from the dog, while the dog was cued by his trainer to achieve his action.

After a crash landing to Earth, a small terrier pokes his head out of his demolished spaceship and wanders through a wooded area. He pauses to bark at a fire hydrant and a statue in a park, and stops to perch on a tree stump. Next, the terrier howls inexplicably and chases several other dogs down the street. He is caught by animal control and transported to a shelter, which is unseen. Off-camera trainers cued Flynn to achieve his actions. The howling was a sound effect added in post production.

At the shelter, the terrier sits in his kennel surrounded by other dogs. Two women coo at the terrier and he growls until they turn their attentions to a nearby Westie, who returns their affections. Soon Owen and his parents arrive at the shelter and Owen decides to adopt the terrier with the "attitude problem." He names him Hubble. Trainers placed the dogs in their kennels for the scene and cued them from off camera to achieve their action.

Owen attempts to train Hubble such doggy basics as sit, stay, and roll-over. Owen soon discovers that Hubble seems to understand every word that he says, and performs each command to perfection. Trainers cued the dog, Flynn, to perform the various tricks from off-camera using verbal cues such as "down" "stay" and "roll over." Later, Owen catches Hubble reading a book. Trainers propped up the book near the dog to make it appear as though he was reading it.

Back at home, Hubble stares and barks at Owen before circling in his bed and lying down to sleep. He suddenly hears barking outside, and one of his ears lifts up like a satellite honing in on the sound. Trainers attached a monofilament wire to the dog's ears with a bit of sticky tape and gently pulled them up on cue. The dog was well-conditioned to his ears being raised in this manner.

During the night, Hubble wanders outside, dragging what appears to be a radio onto the grass. The extraterrestrial radio soon lights up the sky, but Hubble quickly presses a button upon seeing Owen approach. The next morning, Owen awakes to find that not only can he hear Hubble talk, but he can understand and communicate with all of the dogs he encounters. Special effects masters made the dogs appear to talk using post production technology. Trainers also conditioned the dog to interact with the radio prop and taught the dog to pull the prop to a mark.

Hubble rounds up Owen's dog-walking posse and they all convene in Owen's garage to discuss important dog news – namely, the fact that Hubble is from the dog planet Sirius and has come to Earth to discover that Earth dogs have not taken over humans, as planned. Owen talks to the dogs, as well, attempting to persuade Hubble that Earth dogs are not meant for world domination. Nelly shivers nervously while the rest sit and listen intently. Off-camera trainers secured the dogs on "stay" commands during this scene. Imp, who plays Nelly, was also trained to "shake" on command.

Later, the dogs demonstrate that they do, in fact, control their human "owners": they ride in shopping carts, go to the beauty salon, eat sandwiches, relieve themselves on trees their owners planted, and have their backs scratched at will. Each dog performed their respective actions with the help of trainers and plenty of rehearsal time. All animals were comfortable performing the various activities and all safety precautions were in place.

Hubble doesn't buy their act, and remains convinced that the dogs have shown no dominance. Wilson the Boxer begs Hubble to stay on Earth and teach them how to be "top dogs." The trainer cued the dog to "beg" on command.

Hubble's first lesson involves meditation to focus their canine instincts. The dogs all lay on their backs on the grass in the park as Hubble walks by them with instructions. Suddenly, a ball rolls by the dogs and every one except Hubble runs after it. In frustration, Hubble emits one of his crazy howls while standing on his hind legs. Off-camera trainers instructed the dogs to "stay" until it was time to chase after the ball, which they happily did.

Soon, the mean boys in town arrive at the park to make trouble. They throw rocks at Hubble and corner Owen to do the same, but the other dogs run over to intervene, scaring the bullies away with menacing growls and barks. The young actors were filmed separately from the dogs. Trainers gently tossed soft dog treats towards the animals to simulate the rocks, much to the dogs' enjoyment.

I Believe I Can Fly

Owen tosses a ball to the dogs to fetch and they all run after it. Hubble learns that his intelligence doesn't help him in this game and he can't get the ball at first. Hubble then puts his space-dog talents in action and flies off the ground to catch the ball in the air. Unfortunately, he misjudges his landing and ends up in the lake. Hubble climbs out of the lake and shakes off. A stuffy dog was used for the lake landing. Hubble's flying act was achieved with computer-generated effects. For the lake landing, a stuffy was tossed into the water and the real dog was filmed merely trotting onto the shore.

After his lake landing incident, Hubble is sore and limps around back at home. Owen massages Hubble's sore body and the dog quickly falls asleep. The dog was trained to limp.

Inspired by Hubble's aeronautical abilities, the other dogs attempt to fly by jumping up and down and off of furniture, but without success. Wilson even takes a dive off of his diving board and into the pool. Trainers found a Boxer that was already familiar and comfortable with diving and swimming at home to use in this scene.

In preparation for the arrival of the top dog leader from the planet Sirius, aka The Greater Dane, Hubble teaches the Earth dogs to bow in her presence. Hubble also gives them a lesson in table manners, and seats the dogs each on their own chair at a formal dining room table. Owen and his friend approach the table with silver platters of gourmet food, and the dogs all stay in their seats until Hubble gives them the go-ahead to eat. The dogs were trained to patiently sit at the table until trainers cued the dogs to dig into the meal.

At Owen's parents' open house event, Hubble barks and Owen's mom takes him by his collar to the front steps. She ties his leash to the bars and goes back into the house. Soon, the neighborhood bullies come by and steal Hubble, taking him to a barbershop to try and shave off his fur. They tie Hubble to a chair and cover him with shaving cream, but clever Hubble manages to escape. Trainers placed the dog in the barber's chair and covered him with the burlap cloth, which was open on two sides to ensure that the dog could see his trainers at all times. The cotton rope was only loosely tied to the chair and the young actors were instructed to spray the shaving cream away from the dog so that none came in contact with him. One trainer lay on the floor below the chair for added security. The boys did not actually stuff the dog into the sack.

Soon, the rest of the dogs find the boys and chase them back to Owen's house and throughout the yard, knocking over a can of laughing gas along the way. The giddy dogs knock over a snack table as well. Off-camera trainers released the dogs and cued them to run to their marks after ensuring that all items in their path were secured. The gas was actually water-based and non-toxic; real laughing gas was not used. The snack table was tipped over by crew members, and included veggies and only plastic containers and glasses. Hubble also gets a pie in the face, which was gently placed on his head by a trainer, and was made of foam, sponge, sugar, and egg whites. Flynn received a warm bath and blow dry after this messy scene.

The top dog, The Greater Dane, shows up to chastise Hubble and the Earth dogs. The Dane regally stands in a gazebo with her small Chinese Crested henchpup standing next to her. Valentino played the role of The Greater Dane and was cued to sit by an off-camera trainer. For close-up shots, trainers brought Valentino's buddy Mayhem, a Briard, to the set to inspire Val to show off for the camera. The small dog was played by Spirit, who was also placed on a sit/stay by an off-camera trainer.

After his encounter with his leader, Hubble gets a bath. Trainers wet Flynn with warm water and blew him dry after the scene.

Later that night, Hubble sneaks out of the house through his doggy door and meets the other dogs in the street to return to their home planet. Hubble talks to the Greater Dane upon his arrival. Trainers cued the dogs from off-camera to achieve their actions.

The dogs are finally reunited with their Earth owners. They run out of their spaceship and into the arms of their loving guardians. The actors rewarded the dogs with plenty of hugs and treats for coming to them on command.