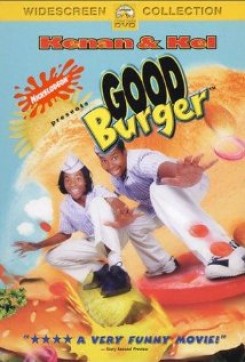 Two dim-witted teenage boys, are forced to save the fast-food restaurant they work at from going out of business, despite a new-and-improved burger joint opening across the street that want to be the "Top Dog" in the fast food industry.

In one scene, a fly is shown buzzing around the cook and lands on his forehead. The actor swats himself on the forehead with a spatula, killing the fly, and then grabs the dead fly and puts it in his mouth. This scene was accomplished with special effects and no real fly was used. In another scene, a small dog runs to the actors and barks. One of the actors throws a big Mondo Burger towards the dog, but the dog won't eat it. The dog is then thrown a Good Burger and he gobbles it up. The dog was placed on his mark and given verbal and hand commands to bark and eat.