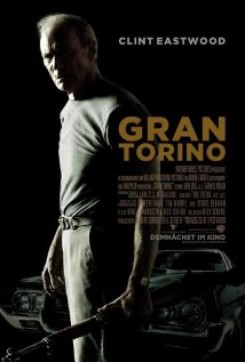 Walt Kowalski (Clint Eastwood) is a lonely veteran living alone in a neighborhood that has changed a lot since he moved there years ago. What was once a predominately white city has become multi-cultural, making him a minority — and forcing him to face his prejudices.

Walt (Clint Eastwood) has a pet dog named Daisy who is played by a yellow Labrador named Holly. Cast and crew members were introduced to the dog and instructed on her proper handling before filming began. All grounds were checked ahead of time for debris and hazards. Traffic was closed off to the public. Only limited cast and crew were allowed on set when the dog was being filmed. Throughout the film, Daisy is seen both on- and off-leash, lying around the house and porch, walking with Walt through the house and yard, and on the sidewalk in front of the house. For this mild action, a trainer placed the dog on her mark and then stood off-camera, using a combination of verbal cues and hand signals to get her to look or walk in a certain direction, or to stay, stand or lay down.

Walt's neighbors are having a party in their backyard and Walt looks over and sees his neighbor holding a live chicken with a large knife to its neck. He appears to slice the chicken's neck. There is a chicken coop with chickens in the background in the yard. The coop was constructed and secured by crew members before filming and was inspected by the trainer and the American Humane Certified Animal Safety Representative™. The chickens were placed inside right before cameras rolled. Feed was scattered around the coop. A trainer instructed the actor on the handling of the chicken before filming began. The trainer handed the chicken to the actor right before filming and stood just off-camera to retrieve the bird afterward. The knife was a plastic prop and a fake bird replaced the real bird for the killing scene.

Due to limited resources, American Humane did not monitor all of the dog action or any of the cat action.