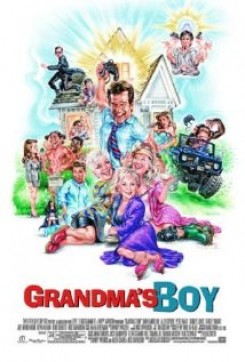 At 35, Alex (Allen Covert) holds the unofficial title of world's oldest video game tester. When one of his roommates spends all of their rent money at a dubious massage parlor, Alex gets evicted and must revamp his life after moving in with his octogenarian grandmother Lilly (Doris Roberts) and her two slightly wacky roommates.

A chimpanzee named Harry played the role of "Monkey" in this film. In one scene, the ninja-attired chimp jumps onto Alex when he stands at the bottom of the basement stairs. After positioning the chimp on the edge of an eight-foot platform, the trainer stood in for the actor and cued Harry to jump into his arms. The trainer then caught the chimp and fell backwards onto stunt pads placed on the floor behind him. The trainer and chimp rehearsed this action numerous times to ensure that Harry was well-prepped for the stunt, and the ninja outfit had been custom-made for a comfortable fit.

All actors and crew members had been briefed on the safety issues and proper handling of the chimp while on the set, and trainers made sure Harry had ample time to become familiarized with the actors with whom he'd be working.

Trainers stood just off camera using verbal cues and/or hand signals to get the chimp to perform simple actions, such as riding on an actor's back or playing with the controls of a video game console.

Green screen technology was used in the scene in which Monkey drives a car; the vehicle never actually moved. When two actors smoke "marijuana" near Monkey in one scene, it was actually an herbal cigarette, and the smoke was digitally enhanced in post production.

The production provided documentation for the "dead cat" props seen under a couch during a cleaning montage.