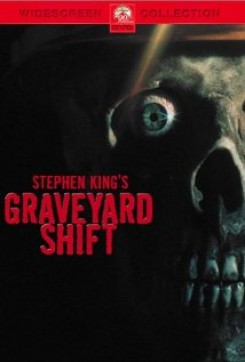 The setting for this eerie tale is a delapidated old textile mill situated between a river and a cemetery. The mill is severely infested with rats. Rats of all shapes and sizes are everywhere. Despite various efforts to dispose of them, the rats are fearless and prolific. When the mill is about to be closed down for all of its violations, the supervisor buys some time by bribing the inspector. The sadistic supervisor then orders a clean up crew to find the rats nesting place, which is believed to be in a sub-basement. The crew must work while the plant is closed for a holiday and during the cooler evening hours, otherwise known as the "graveyard shift". There are many bloody and violent scenes involving people and rats. Real rats and fake rats in the form of puppets and mechanical rats were used. Great care was given and staging was carefully worked out so that no rat would be harmed. Much training and preparation was given to the rats prior to any filming. An American Humane representative was present both during training and at all times during filming.

As for some of the specifics, when a rat is thrown into the shredder a real rat is carried to the machine and dropped into a foam cushioned box in front of the shredder. Then a fake rat made of cotton with a plastic tail and covered with stage blood is used. When a rat runs from an exterminator's spray (actually plain water), it is responding to the sound of a clicker that signals where his rat chow is. When a soda can is thrown by sling-shot and hits a rat, the can actually hits an area in front of the rat and the rat is pulled out of sight by the trainer, who is unseen by the camera. The vacuum hose sucking up rats is sucking up fake rats. Scenes with the water hose were shot in cuts with real rats then cutting to the fake ones being hosed away. Whenever real rats were in water, trained swimming rats were used and closely monitored. Fake rats were used to portray dead rats. The gigantic mutant monster rat is, of course, a puppet. Despite the many visual tricks, the producers were afraid that the rats would not be terrifying enough, so the talents of a top voice-over artist were added to the sound track.